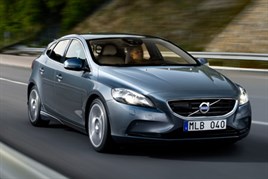 Fleet operators were given the first chance to drive the Volvo V40, the brand’s first premium five-door hatchback, at Company Car In Action (CCIA).

The V40 has already earned praise with industry influencers with some describing it as a “true contender” to German brands and the feedback at CCIA was equally positive. One attendee described it as “a winner”.

But Selwyn Cooper, national corporate operations manager at Volvo, is confident that numbers will ramp up next year.

“Next year we’ll get the capacity but we won’t bring in cars we can’t sell,” Cooper said. “This is a premium car and residual values are key.

“We’re going to work hard to protect that for us and for our customers that make the investment.

“What we’ve been delighted by is we’ve had a number of corporate customers order the car without seeing it in the flesh.

“It’s not unheard of but it’s unusual for Volvo. It’s a real jump of faith.

“But we do realise that many company car drivers and fleet managers want to see the car and drive it and that’s why we pulled out all the stops to bring it to CCIA.”

Volvo’s fleet sales (excluding Motability sales, which have declined this year, as expected) were up 29%, January to May this year.

Cooper puts the growth down to Volvo’s products – with strong V60 and S60 sales – and investment in dealer training.

A Business Sales Academy has been set up to equip sales teams and sales managers with the knowledge and skills they need to sell to fleets.

More than 300 sales managers and sales consultants have now completed phase one of the training programme.

“We’re consulting with the dealer network now on what stage two should look like,” James Shires, national corporate sales operations manager at Volvo, said. “We have our own thoughts but we want to work very much in partnership with our dealer network. We want to understand their views, needs and desires.”

The V60 plug-in hybrid, which has emissions of just 49g/km, launches this year and was also available to drive at CCIA.