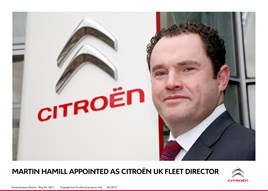 Citroën UK has appointed Martin Hamill as fleet director with effect from July, 9, 2012.

Currently Citroën’s head of commercial vehicles and business sector, Hamill will replace Andy Wady who is leaving the company. He will report to Citroën UK managing director Linda Jackson.

As fleet director, Hamill will be responsible for Citroën UK’s national fleet business as well as its remarketing operation.

Hamill has been with Citroën for 13 years, starting out as an area fleet manager handling the fleet car and LCV business in the Midlands.

He then moved to the position of commercial manager, working with the Citroën dealer network, and was then promoted to national fleet operations manager where he was responsible for Citroën’s area fleet team.

Commenting on his new position, Hamill said: “I’m delighted to take up this important role at such an exciting time for the brand. The introduction of the DS line and initiatives like our Business Class programme have changed the way we’re perceived right across the industry.

“We will continue to develop our fleet offering and service levels, and I look forward to working closely with my team so that we further build our presence and therefore volumes in the years to come.”