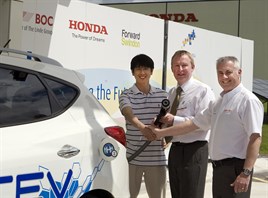 The car, a Hyundai ix35 FCEV (fuel cell electric vehicle), was refuelled in compliance with the industry’s international operating standard, the SAE J2601 Protocol, at the UK’s only public-access hydrogen refuelling station in Swindon.

On separate occasions over a two-day period, five kilograms of high purity hydrogen were dispensed at a pressure of 700 bar in less than three minutes, the gas having been pre-cooled to -40°C.

Soongil Kweon, senior research engineer at Hyundai, oversaw the refuelling on behalf of the car manufacturer.

He said: “The capability of the BOC station to refuel cars at both 350 and 700 bar pressures demonstrates that the UK is rapidly increasing its credibility as a location for the roll-out of hydrogen-powered passenger cars.”

The ix35 FCEV is Hyundai’s third-generation fuel cell electric vehicle and is equipped with a 100kW (136hp) hydrogen fuel cell stack and two hydrogen storage tanks with a total capacity of 5.64 kg, enabling the vehicle to travel a total of 525 km on a full tank, emitting only pure water.

Maximum speed is 160 km/h and it can reliably start in temperatures as low as -25°C.

Many major vehicle manufacturers have publicly announced that they will begin commercialising hydrogen vehicles in 2015.

The standard specification for refuelling systems in these new models will be 700 bar pressure, so the Swindon station will be able to service these vehicles as soon as they appear on Britain’s roads.

Nick Rolf, BOC innovation manager for hydrogen systems, said: “We hope that this visit will encourage other vehicle manufacturers to take the opportunity of bringing both 350 and 700 bar vehicles to the UK as well.”

The station is the result of a partnership between BOC, a member of The Linde Group, together with car maker Honda and Swindon’s economic development company Forward Swindon.

Mike Godfrey, chief engineer at Honda, said: “The hydrogen economy is developing rapidly as new vehicles and specifications are developed. But we need the refuelling infrastructure if hydrogen transport is to be a reality for everyone in the UK, and this refuelling station shows the way forward.”