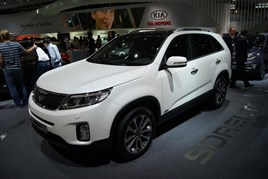 Kia has announced a facelifted Sorento will be launched in November, while a sporty, three-door version of the Ceed, the Proceed, will be added to its line up in spring 2013.

The Sorento features a new platform and re-engineered bodyshell to offer improved ride and handling, according to Kia. The interior has also been refreshed which will, as with all new Kias, include better quality materials.

The engines have been enhanced and, together with the use of lighter materials, means CO2 emissions will fall by 14% to 153g/km on the 2.2-litre diesel.

Sales are unlikely to change much from the current model’s 2,200, split evenly between retail and fleet – although the fleet figure will include a large number of dealer demonstrators and rental cars.

Meanwhile, the Proceed will be primarily a retail model, but Kia is confident it could appeal to user-chooser fleets with a more relaxed policy on three-door cars.

It will be powered by the same range of engines, transmissions and running gear as the Ceed five-door and Ceed Sportswagon. A high performance 204bhp engine is expected to be announced at next year’s Geneva motor show, which is likely to include double-clutch transmission.