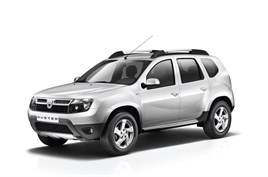 Renault's budget brand, Dacia, has demonstrated that inexpensive cars are often the best performers for depreciation.

Figures from CAP show that a typical Dacia Duster will retain 34% of its new price after three years/60,000 miles.

The Duster range starts at £8,995 on the road for the entry-level front-wheel drive petrol model, with the range-topping four-wheel drive diesel at less than £13,000.

Dacia UK marketing director, Phil York, said: "We know that the Dacia Duster is a great package for anyone after a practical, reliable and affordable SUV.

"CAP’s view just reaffirms our belief that its got bucketloads of appeal for British buyers. After living with one, I doubt most owners will ever want to be parted from their trusty Duster. But, if they do have to sell it, or maybe even trade it in for a newer Dacia, they won’t be hugely out of pocket.

"I can’t help but think the residual value forecast for Sandero is going to blow the competition away too, in the not too distant future."