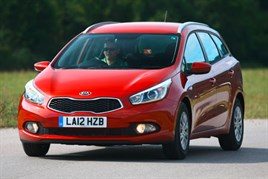 Korean manufacturer Kia Motors is the fastest growing brand in a top ten league table of the best-selling models of 2013 at fleet management and leasing specialist, Fleet Alliance, based on new cars ordered by fleet customers this year.

For the first time there were two Kia models, the Ceed and the Sportage, in the company’s best-selling charts. The Ceed rose 51 places to seventh in terms of sales volume, while the Sportage rose from 10th place last year to eighth place this year.

At the top of the Fleet Alliance league, the dominance of German brands continued with the Audi A3 moving up one place to be 2013’s most popular model. This was followed by the Volkswagen Passat, which dropped down one place from its number one position in 2012 to finish second this year.

Hot on their heels came two cars from Vauxhall, with the Insignia in third position, up one place on last year, and the Astra in fourth place, up from 13th position in 2012.

Fleet Alliance compiled a list of the ten most popular models from those supplied to fleet customers so far this year on its fleet of around 11,000 vehicles.

Models that dropped out of the Fleet Alliance top ten included the Ford Mondeo which fell from fifth place in 2012 to 33rd this year; the BMW 5 Series which fell from seventh place to 11th; and the Skoda Octavia down from ninth place last year to 18th this year.

As sales have increased, so carbon dioxide emissions have continued to fall across the fleet, and now stand at an all-time low of 123g/km per vehicle on average, compared with 125g/km in 2012. Some 61% of the Fleet Alliance fleet now emits less than 130g/km, compared with 53% last year.