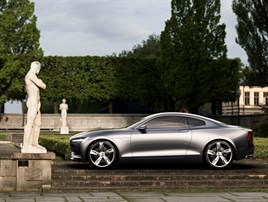 Volvo will show a new coupé concept at Frankfurt Motor Show which both harks back to the P1800 of the 1960s and showcases a new design direction for the brand and new technology.

The first design by the new senior vice president of design, Thomas Ingenlath, the Concept Coupé showcases a more emotive Volvo design and points towards the next generation of models, starting with the forthcoming XC90 in 2014.

“The Volvo Concept Coupé is no futuristic dream car. It is designed to demonstrate the capability of our new architecture: the confident stance, the proportions and the most prominent design signatures,” said Ingenlath.

"Even though the all-new XC90 is an entirely different type of car, you will recognise the connection instantly when it is revealed next year."

Developed in-house for Volvo, it marks a break away from previous models where some cars were based on shared architecture with other manufacturers.

The petrol plug-in hybrid driveline in the Volvo Concept Coupé reflects Volvo Cars’ strategy to use electrification to create the most powerful versions in the new four-cylinder Drive-E engine family. This will take power figures up into V8 territory.

The concept car features a two-litre high-performance Drive-E petrol engine with a supercharger and turbo. The petrol engine is teamed with an electric motor on the rear axle. This gives Volvo Concept Coupé a total output of around 400hp and more than 440lb-ft of torque.

“The new Volvo Concept Coupé reveals how we could shape our cars from now on,” said Ingenlath. "Free from the superficial surface excitement of other car brands, we add emotional value to the Volvo brand with the calm, confident beauty that is the hallmark of Scandinavian design."