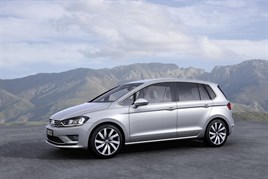 Volkswagen has revealed the first images of the Golf Sportsvan Concept, the successor to the Golf Plus, which will make its debut at the Frankfurt Motor Show (IAA) tomorrow (Tuesday).

The new model is based, like the multi-award-winning Golf hatchback, on the MQB platform, and incorporates all the advanced technology of that car, but in a larger, even more practical body style.

Its exterior design clearly follows the look of both the Golf, and Volkswagen’s more generic ‘DNA’.

Inside, the rear seats (60:40 split bench) can slide forwards and backwards by up to 180 mm, to increase either passenger or luggage space as required.

As well as this versatility, the Golf Sportsvan also offers extra space. Compared with that of its predecessor, boot capacity is increased by 74 litres to 498 litres (versus the Golf’s 380 litres), with the back seats at their rear-most position.

Moving the rear seats forwards increases the luggage capacity to 585 litres, while folding the rear seats liberates up to 1,512 litres of room. The front passenger seat can optionally fold fully forward, creating a load space which is up to 2,484 mm long.

Like the Golf hatchback, the Sportsvan comes not only with a stronger, safer body structure but also a raft of standard and optional passive and active safety systems.

These include an automatic post-collision braking system which automatically brakes the vehicle after a collision to reduce kinetic energy significantly and thus minimise the chance of a second impact, and a PreCrash system which, on detecting the possibility of an accident, pre-tensions seatbelts and closes the windows and sunroof, leaving just a small gap, to ensure the best possible protection from the airbags.

Other electronic aids include Adaptive Cruise Control, Front Assist and City Emergency Braking, all of which can reduce or eliminate the chance of accidents occurring.

A first for the Golf Sportsvan is a Blind Spot Monitor, with an assistant for exiting parking spaces. This monitors the area behind and to the sides of the vehicle, ensuring easier and safer egress when reversing from a parking bay.

Powering the Sportsvan will be a range of petrol and diesel engines, all of which conform to Euro 6 emissions standards and incorporate Stop/Start and battery regeneration systems.

The Golf Sportsvan is expected to go on sale in the UK in mid-2014. It will not use the Sportsvan name in the UK; naming will be confirmed closer to launch.