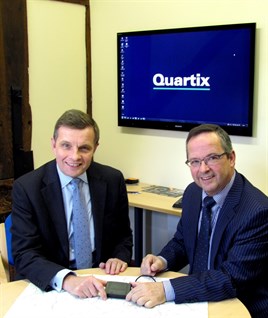 Secretary of State for Wales, David Jones, has visited Quartix in Newtown, one of the leading vehicle tracking businesses in the UK.

Accompanied by Graham Morgan, director of the South & Mid Wales Chambers of Commerce, he met with Andy Kirk, director at Quartix, to find out more about the company’s growth and success in the UK and overseas, and to learn more about the system and technology themselves.

Jones was shown the Quartix’s system advanced driving-style monitoring suite, which helps business run greener and cheaper fleets by cutting their fuel usage by up to 18%, and its Safe Speed Database, which provides detailed speed profiles of 15.7 million road segments in the UK.

Kirk said: “We were delighted to host a visit from the Secretary of State – it was much enjoyable and informative.”

Founded in 2001, Quartix has grown to become one of the UK’s most respected vehicle tracking companies.

Today, more than 5,000 customers across almost all sectors of the UK economy use the system – including government organisations, housing associations, construction firms, hospital trusts, the emergency services, SMEs and large British brands. Over 43,000 units were installed during 2013.

The vehicles used during the London 2012 Olympic and Paralympic Games were tracked with Quartix’s advanced GPS telematics units, giving real-time information on the exact locations of vehicles at any time.

Quartix operates across France as well as the UK, and has been preparing for a 2014 launch in the USA.