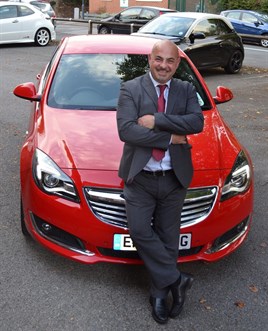 A holidaying company car driver at Toomey Leasing Group has achieved 990 miles on one tank of fuel from his Insignia 2.0 CDTi SRi VX-Line.

The leasing company already has 20 of the five door models on its company car fleet, used by its sales managers for both personal and professional use.

After using his company Insignia to drive his family of four on a round trip of 3,200 miles from the UK to Naples in Italy, one sales manager, Dino Landico, was able to achieve an average of 59mpg in his Insignia.

“Even with all our luggage, driving the Vauxhall Insignia meant I was able to take my family on holiday without spending a fortune,” explained Landico.

Martin Wroe, managing director of Toomey Leasing Group, said: “Lowering carbon emissions is a key priority for the company, which is one of the reasons behind why we have chosen the Vauxhall Insignia, which has CO2 emissions of just 98g/km, for our company’s fleet.

“As these cars are used by our employees outside of work as well, low fuel consumption is even more important, so it’s very encouraging that we have already received such positive feedback from those who have noticed a difference.

“Since our employees will be using these vehicles at home as well as at work, we needed to choose a model that would be versatile enough for all kinds of situations.”

The cars, which are being used by Toomey Leasing’s team of sales managers to visit clients nationwide, will drive an average of between 15,000 to 35,000 miles per year.

Paul Adler, fleet marketing manager at Vauxhall, said: “We’re really pleased to hear how happy Toomey Leasing’s drivers are with the Insignias and we hope they will continue to be impressed by their fuel economy, performance and versatility.”