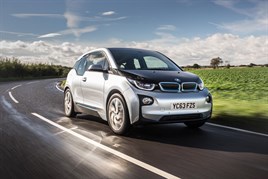 More than 100 businesses in South Yorkshire are expected to cut fleet and travel costs following the launch of an electric vehicle initiative.

The Inmotion Electric Vehicles Scheme, which is believed to be the first of its type in the country, is a partnership between Barnsley, Doncaster, Rotherham
and Sheffield Council, and South Yorkshire Passenger Transport Executive.

Its remit is to implement the Department for Transport’s (DfT’s) Local Sustainable Transport Fund programme in the area.

Electric cars and vans are supplied through the scheme via partner contract hire and leasing company Venson Automotive Solutions, while Npower is responsible for programme administration and installing a workplace charging point.

The scheme was established as part of a successful bid for £24.6 million from the DfT’s Local Sustainable Transport Fund. It enables private and voluntary sector businesses and organisations – public sector organisations and sole traders are excluded – to obtain a grant up to £10,500 for a plug-in van or £7,500 for a plug-in car.

There is also a £500 grant towards the approximate £1,000 cost of installing a workplace recharging point. There are currently 16 recharging points across South Yorkshire with plans for a further six.

Under the Government’s own plug-in car and van grant schemes, applicants benefit from maximum cash support of £8,000 per van and £5,000 per car. Inmotion cash increases the subsidy by a further £2,500 per vehicle

The initial scheme runs until March 31, 2015, or until 80 organisations have signed up – 75 places remain at the time of writing – but a further £4.8 million of DfT funding has been won that gives another 30 businesses access to electric vehicles in 2015/16.

Cash support is allocated on a one electric vehicle per organisation basis, although Inmotion is considering how it can help applicants fund more models.

Vehicles are supplied fitted with a tracker to report mileage to scheme organisers so the benefits can be logged by the Office for Low Emission Vehicles (OLEV), which is a condition of securing Government funding.

An Inmotion spokesman said Government interest had been won because it “brought together funding, vehicles and recharging points in one package” making the scheme an “attractive proposition to fleets”.

Many previous initiatives, he said, had focused on charging infrastructure or vehicles alone.

He said there was particular interest from delivery and catering businesses operating light commercial vehicles that undertook regular journeys.

Sheffield United Football Club’s Community Foundation was the first organisation to sign up to the scheme and is now operating a Nissan Leaf as a pool car.

Patrick Piearcey, business development officer, said: “We can save in the region of £10,000 a year in terms of using the Leaf as a pool car, which is quite a substantial saving for the charity to make.”

The scheme is part of the wider Inmotion project that is dedicated to helping businesses across South Yorkshire get the most out of available travel options from bus,
tram and train to walking, cycling and more efficient driving.

From a fleet perspective, schemes include the ECO stars Fleet Recognition Scheme and ECO-Business Driving – a free training scheme launched 12 months ago to help employers improve safety and reduce the impact of vehicle use on the environment by cutting their fuel and accident-related costs.

Since launch, 1,000 company car and van drivers from South Yorkshire businesses have completed the course with a further 1,300 signed-up.

A spokesman said: “Particular interest in electric vehicles is coming from businesses that are already involved in ECO stars and ECO-Business Driving and are now looking at their wider fleet operation to see how they can reduce costs.”

Venson Automotive Solutions has less than 100 electric vehicles on its fleet, but believes they have a place in employers’ transport strategies subject to the critical requirements of operational and financial viability.

One of the leasing company’s major customers is Npower and Simon Staton, director of client management at Venson, described the Inmotion scheme as a natural opportunity for the business.

Venson believes it was the first contract hire and leasing company to support the drive to encourage fleets to take-up electric vehicles when it held a ride and drive event more than six years ago.

Staton admits that electric vehicle demand is a slow burn, but said: “If electric vehicles are right for clients in terms of being fit for purpose and in respect of whole life costs we are happy to take the commercial risk with residual values and maintenance budgets.”

While Venson is supportive of electric vehicles and the Government is pumping millions of pounds into the sector, Staton said he was not surprised at the slow speed of fleet demand due to a variety of challenges that needed to be overcome including: whole life cost concerns, future company car benefit-in-kind tax rises; range anxiety and a recharging network still being developed.

“We are very supportive of electric vehicles, but they have to be right for fleets and drivers,” said Staton.

“Initiatives like the South Yorkshire electric vehicle project can serve to lay the path for local businesses throughout the UK to reduce CO2 levels in their region.”