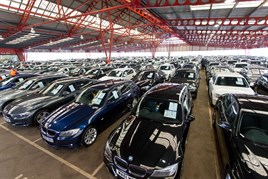 BMW Group and BCA staged a massive 1,000 car sale on behalf of the manufacturer at the Bridgwater, Somerset auction centre on November 13 and 14.

The two-day event celebrated Bridgwater’s 100th Sale on behalf of the BMW Group and offered 500 cars for sale each day through two auction halls.

Buyers turned out in large numbers for the event – both in the hall and via BCA Live Online - and bidding was fast and furious on both days.  In total, 939 vehicles were sold, equivalent to a 92% conversion that generated a turnover in excess of £14 million – a record for a manufacturer sale at BCA - and an average selling price of more than £15,100 per vehicle. The sale averaged 97.5% of CAP Clean across the board.  Over 200 MINI sold and a special Top Car section of 259 BMWs saw every car sold.

Jonathan Beecham, BMW Group remarketing operations manager said: “This was an exceptional result given the time of year when it was staged and underlines the support for the BMW/MINI brand at BCA.  Every aspect of the sale was well planned and executed, with a very effective digital marketing campaign conducted by BCA in the run up to the sale.  The team at BCA Bridgwater pulled out all the stops to ensure our vehicles were prepared and presented to the very highest standards and the result speaks for itself.”

BCA made a charitable donation of £1 for every car sold during the two-day event to the Movember Foundation Charity, the leading global organisation committed to changing the face of men’s health.

BCA general manager Darren Betteridge said: "This high profile event was the largest manufacturer sale staged by BCA this year.  The 92% conversion, strong CAP performance and record-breaking turnover underlines the desirability of the BMW and MINI product in the used market.”