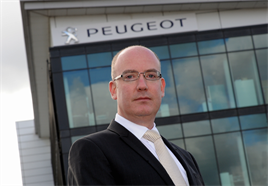 Martin Gurney is to add responsibility for Citroën and DS to his existing Peugeot head of fleet role.

Gurney, who became Peugeot head of fleet in November last year, takes on responsibility for all three PSA Peugeot Citroen brands in the UK.

He takes over from Martin Hamill, previously responsible for fleet at Citroen.

A Citroen spokesman told Fleet News that Hamill had not yet made a decision on his future role, and whether that would be with the company.

Hamill has been with the brand for 15 years, while Gurney has previous experience working across the group, as director, programming, logistics and distribution for PSA Peugeot Citroën UK.

The move comes as part of a management restructure that sees Stéphane Le Guével become director general of the UK operation.