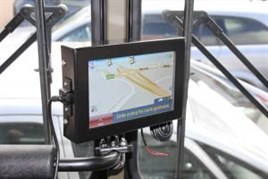 A stolen LGV was recovered by police within 90 minutes thanks to Microlise telematics system.

Synergy Health, global provider of specialised outsourced services to healthcare and other related services, has a fleet of vehicles based at Sheffield. They discovered that a DAF LF45 12t rigid had been taken on Thursday 13th February at 3am. On notifying the police of the theft, Managers at Synergy Health informed them that Microlise telematics was installed in the vehicle.

Mark Bolton, divisional logistics manager at Synergy Health said, "We’ve had Microlise installed across our fleet since November. The system offers us visibility of the position of the vehicle on a map so we were able to simply tell the police where it was."

Police recovered the vehicle at 4:30am some 35 miles away just south of Leeds in the village of Thorpe On The Hill. The vehicle, worth around £70,000, was found largely unscathed with only the stereo and the Microlise in-cab Driver Communications Tablet missing.

Nadeem Raza, Managing Director at Microlise added: "From reporting the Synergy Health vehicle missing to its recovery took around an hour and a half thanks to our system. It can often take the police days, even weeks, to locate stolen vehicles, by which time the transport operation has suffered the financial loss of being a vehicle down. In addition, the longer the recovery takes, the increased chance of the vehicle being vandalised."

"The irritating fact is that the thieves will get no use from the stolen kit." Nadeem continues, "The Microlise in-cab units are locked down and chances are the stereo was coded too. It all seems such a waste of time and resources, thankfully reduced considerably by Microlise."

Mark Bolton added, "The Microlise System has proved itself in locating vehicles on a day to day basis to aid our service to our customer base. This latest development has shown that not only does modern technology benefit the operation through reduced MPG and emissions but can also dramatically reduce the financial impact when dealing with vehicle theft."