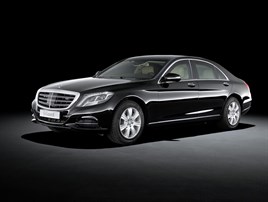 Mercedes-Benz has updated its range of special protection models with the new S600 Guard based on the new S-Class.

The S600 Guard provides all-round protection to the level of resistance class VR9 - both in transparent and non-transparent areas.

With its Guard models, Mercedes-Benz has the world's widest range of special protection vehicles.

The armouring of the S600 Guard follows the principle of integrated protection based on many years of Mercedes-Benz experience in building special protection vehicles.

The major advantages are:

• Outstanding strength and stability thanks to specific reinforcement of the base structure which is integrated into the bodyshell production stage.

• The high level of comfort is maintained by sophisticated integration and intelligent overlapping of all protective elements.

Already at the bodyshell stage, protective components of special steel are integrated into the cavities between the body structure and the outer skin.

The glass areas are an essential part of the protective concept. They are coated with polycarbonate on the inside for splinter protection, and have outstanding visual characteristics thanks to their laminated structure.

Particular attention is devoted to the protective performance of the glass areas, with an appropriate choice of materials and thicknesses.

The interaction between all the components provides the occupants with a highly effective protective space which not only includes ballistic protection, but also comprehensive protection against explosive devices.

The occupants are effectively protected by the armouring if a splintering explosive charge is fired at close range on either side.

With its protective system, the new S600 Guard has immediately met all the personal protection requirements of the relevant authorities in Germany, and is the first vehicle to have been certificated for highest ballistic protection in resistance class VR9 (according to BRV 2009, version 2).

Where explosive charges are concerned, the new S-Guard has demonstrated its protective capabilities by meeting the requirements of ERV2010 and the Federal Office of Criminal Investigation.

Despite the extensive protective measures, the S600 Guard is externally hardly distinguishable from the standard model.

Its exterior has the same lines, the same design of the LED headlamps and the same LED rear light clusters.

As the S600 Guard is hardly recognisable as an armoured saloon, it meets a further important requirement for special protection vehicles: maximum discretion thanks to unobtrusiveness.

Meanwhile, the S600 Guard delivers superior performance thanks to its V12 petrol engine, which now generates 530hp and therefore has even more pulling power than the engine of the preceding model.

Thanks to 830Nm of torque and the 7G-TRONIC automatic transmission, which is available with the V12 engine for the first time, the S-Guard combines lower fuel consumption with impressive acceleration for a rapid escape from the danger zone when under threat.