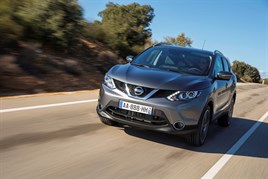 Sales of Qashqai, Juke, Note, and Leaf helped Nissan record 5,651 passenger car fleet registrations in January – a 49% increase on the same month last year, taking the brand to fifth place ahead of Mercedes-Benz and BMW.

Leading from the front was the all-new Qashqai which clocked up 2,665 fleet sales in January 2015 – exactly one year after its global launch – to confirm its position as the fifth bestselling model in the UK fleet sector.

The Juke remained a popular choice with company car drivers with 1,214 fleet registrations in January 2015 while fleet sales of the Note family hatchback were up 26% year-on-year to 1,009 units.

The 100% electric Leaf also enjoyed an outstanding month with fleet registrations up 43% on January 2014.

LCV registrations were bolstered by sales of the NV200 and all-electric e-NV200 vans, both of which are generating increasing interest from fleet operators large and small.

The January figures build on Nissan’s performance in 2014 – the company’s best ever year for fleet sales in the UK.

Barry Beeston, corporate sales director at Nissan Motor (GB), said: “I’m delighted that we have started 2015 as we ended 2014 with another set of remarkable registration figures.

“Our status as Britain’s biggest car maker is particularly important to us and so it’s especially pleasing that the models which are proving most popular with fleet customers are built right here in the UK.”