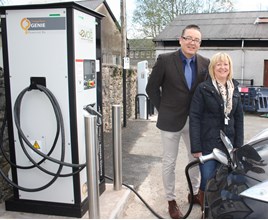 Evolt, the Electric Vehicle charge point supplier, has completed the installation of Cumbria’s first publicly accessible EV Rapid charging network, which is now available for use.

Nine locations across the county now benefit from a 50Kw rapid charger that can charge an EV within 30 minutes. A further 7Kw fast charger has also been installed at four of those sites (Carlisle, Kendal, Workington and Keswick). The other five sites are comprised of Whitehaven, Ulverston, Kirkby Stephen, Kirkby Lonsdale and Ambleside.

Evolt, which is a division of the APT Controls Group, won a competitive tender to supply its charge points from Cumbria County Council in November 2015.

Councillor Janet Willis, Cumbria county council cabinet member for Environment, said: “Up until now there have been limited charging facilities in Cumbria. I’m sure this project will help open up the county to more electric vehicle drivers and make a real difference, both in Cumbria and nationally.”

The installation process included three stages: firstly, initial civil works including excavation and inserting power cables, ensuring the power infrastructure is in place; secondly the physical charge points’ installation; and finally their connection to a back office management system that remotely monitors each charge point. After testing, the charge points have been made ready for public use.

Justin Meyer, general manager of Evolt, said: “The new network will drive forward EV activity in the region, with the infrastructure actively supporting the ambitions of an ever-increasing industry.”

Suzanne Burgess of Solway Renewables initially proposed that the Council should seek funding from OLEV. She said: “There has been significant interest surrounding the charging network, and it will make a substantial difference to individuals, small business and the tourist industry that is hugely important for Cumbria.”