Average used values at BCA fell by 2.5% in May 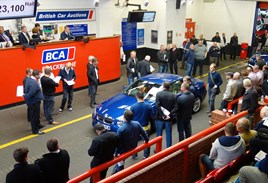 Average used car values fell by 2.5% at BCA in May, but professional buyers continued to bid strongly on a wide range of stock.

At £8,861, the headline figure in May fell by £229 (2.5%) from the record value of £9,090 achieved in April due to high volumes of stock continuing to reach the wholesale sector and a slight change in mix that saw greater numbers of dealer-PX cars reaching the market in May.

Average values for fleet and lease stock and dealer part-exchange vehicles were down marginally month on month, while values for nearly-new cars rose slightly.

Year-on-year, average values rose by exactly £600 (7.2%) – a result of ongoing steady levels of demand and BCA offering a richer mix of stock with a lower age and mileage profile.

Simon Henstock, BCA Chief Operating Officer UK Remarketing commented “May generally saw a very similar price performance across the board to April, with comparable conditions holding sway.  Professional buyers remain very selective, often buying to order and focusing their attention very firmly on the ready-to-retail vehicles that can be churned quickly.  The best presented and specified cars are selling quickly, and may well exceed guide expectations.  The budget end of the market is relatively strong, providing the condition is good and vehicles are sensibly appraised and valued.”

For the third month running, average values in the fleet and lease sector remained at or near record levels.  This sector saw values average £10,446 in May, a small month-on-month fall of just £27 from April’s highpoint.  Retained value against original MRP (Manufacturers Retail Price) fell slightly to 42.63%, while year-on-year values were up by £540 (5.4%), as both age and mileage continued to decline.

The latest BCA Pulse report shows that both fleet and lease and part-exchange values rose in March, with both sectors recording value growth over the year.

Values of used petrol cars are at a four-year high, according to a recent survey by Autorola UK.