Blue set to be most popular car colour in 2018 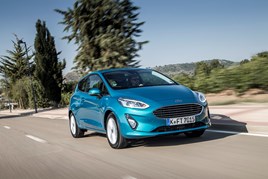 Blue cars could become a more common sight on the roads in 2018 as industry experts predict the colour will be a key trend.

But the increase in blue cars will be a result of car makers’ strategies rather than consumer preference.

When white became the most popular choice for cars, manufacturers lost revenue from metallic paints.

As a result, some began charging for solid white and some funders reduced the residual value on solid paint cars – making them more expensive on a monthly basis.

Tim Alcock of Leasecar.uk said: “It’s very interesting to see how manufacturers’ revenue-based strategies affect what we see on the roads.

“If we had to pick three colours in order of popularity we’d say grey, black and white, but after that comes blue.

“White is still obviously very sought after, because it’s the third most popular even though it’s often a chargeable extra.”

Demand for white cars has fallen for the first time since 2005, but the colour is still the most popular among new car buyers.