More than 15 million drivers could be invalidating their insurance by flouting common policy rules, according to research from pay-as-you-go insurer Cuvva.

In a study of UK motorists, 70% admitted to having broken one or more rules, which in the event of a crash, could void their car insurance policy and leave them open to compensation claims.

According to Cuvva’s research, two in five drivers (43%) eat while behind the wheel, while one in five (18%) have had a pet in the front seat. A further one in six (16%) have driven in flip-flops, and barefoot (15%). Car insurers have the right to void your policy if they discover any of these misdemeanours have been committed in the event of a crash.

With the average insurance pay-out following a claim in 2017 the highest on record - at £2,936 - the financial consequences for drivers are considerable.

Freddy Macnamara, CEO and founder of Cuvva, said: “The insurance industry needs to start educating drivers so that more people can avoid making common mistakes. Some of these slips-ups, such as offering to park a car for a friend, seem fairly innocent but can still be met with crippling fines and license penalty points.

“The problem is that insurance policies tend to be packed full of jargon and come with vast amounts of paperwork, which can cause drivers to disengage. The sector arguably needs to modernise in response to this, by going more digital. If insurance becomes more accessible and digestible, drivers will have a better chance of understanding and abiding by policies.”

UK drivers are also leaving themselves open to fines, with more than one in ten (12%) admitting to parking someone else’s car without checking they’re insured, and one in 20 (5%) borrowing a car without making this check. When drivers were asked who would be penalised if they let someone else drive their car without correct insurance, two in five (43%) did not know the answer. 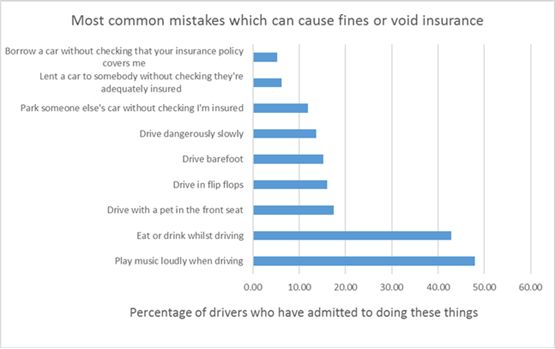 Fleet Poll
Will the Government continue its freeze on fuel duty in the March Budget?
Vote
View all
132