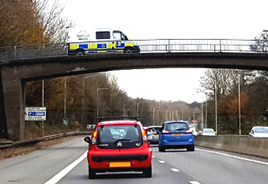 The partnership, which is made up of 27 equal partners including the 22 unitary authorities in Wales, four Welsh Police Forces and the Welsh Government,

It stresses that GoSafe cameras are placed where people have been killed or injured, where excessive speeds have been recorded, for special operations such as enforcing not wearing a seatbelt or at site of community concern.

A statement said: “Cameras are not hidden to catch drivers out or placed where they will record the most speeding offences.

“Cameras are there to encourage motorists to drive within the speed limit, so the most successful cameras are those which record the least number of offences, not the most.”

The sites will be selected according to collision risk and in order to maximise the compliance with the speed limit across the whole of Wales, not just where the minority think they could be detected.

This deployment strategy could mean that one enforcement site on a route will be enforcing speed, while another site focuses on mobile phone use, or both could focus on speed.

Teresa Ciano, GoSafe partnership manager, said: “We know that where there are mobile cameras present motorists comply with the speed limits and with our cameras being present on only 2% of the road network of Wales we strongly believe that our cameras should be able to extend their effectiveness across a larger section of the road network.

“There is never a need or an excuse for speeding and this new strategy is aimed at improving the compliance of the speed limits by motorists across the roads of Wales for the safety of all.”

Earlier this year, research from HPI found 1.7 million drivers exceed the speed limit on every journey they make, equating to around 5% of all motorists.