UK road users could suffer a 16% increase in potholes over the next 10 years, without the Government’s promised investment of £500 million per year, new research reveals.

The research, which was carried out by economics consultancy Cebr and Zurich UK, examines multiple factors which contribute to the number of potholes such as traffic levels, weather conditions, government funding and historical volumes of potholes.

Rod Penman, head of public services Zurich UK, said: “Potholes are the symptom of a much wider and deep-rooted issue.

“It’s been getting worse simply because Government funding and council resources have not been sufficient enough to cope with the magnitude of the issue.”

Across the board, councils will have lost almost 60p in every £1 of central Government funding in the last decade.

Penman explained: “This isn’t just about drivers and burst tyres. Potholes create far-reaching effects for pedestrians and cyclists who are most likely to incur the worst injuries.

“We welcome the Government pledge to invest in this problem, however with our research suggesting potholes will increase without it, there’s still a lot to do.”

Potholes across the country

It’s not a level playing field across the UK when it comes to potholes. Much of this can be attributed to sheer volume of traffic which creates more pressure on the road infrastructure.

Unsurprisingly, London is expected to have the highest volume of potholes by 2030 totalling more than 14,843. Without Government investment, this figure will hit 23,428.

In 2015, cars drove a total of 226 billion miles on roads in England and Wales. By 2030, this figure is forecast to reach 290 billion (Department for Transport) placing greater pressure on road infrastructures. 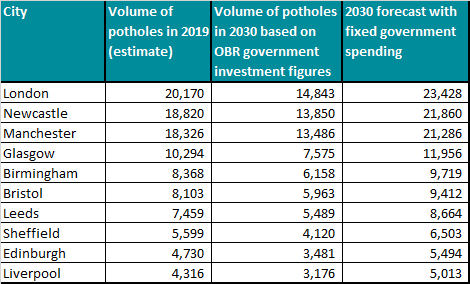 The scale of the current pothole problem in the North of England, together with the large share of the region’s traffic that is focussed in Newcastle, means the volume of potholes in this area could reach 21,860 if Government spending does not pick up.

However, potholes are not local authorities only challenge as they have to balance many other dynamics such as clean air zones and initiatives that encourage high tech business into the area, with a consequential impact on highways.

Weather conditions have a huge impact on potholes. Following one of the worst winters on record in 2010 there were almost 1.1 million potholes reported across the country.

Based on Met Office projections for minimum temperatures across the UK, the number of air frost days is set to decline to just 44 in 2030.

Penman concluded: “Whether or not the increased Government investment comes to fruition, potholes are going to remain a significant issue and it’s crucial that highway authorities take a strong risk-based approach to road maintenance services.

“Implementing the requirements of the Code of Practice and continuing the efforts to use their money as effectively as possible will be vital in order to drive further value from the Government’s investment.”

If the Government fulfils its manifesto pledge

Based on Office for Budget Responsibilities’ (OBR) and Cebr's investment predictions for the next 10 years, the additional funds would serve to reduce the volume of potholes across the country by just over a quarter.

The research shows that by 2030 we could see almost £9 billion of Government funding invested in UK roads.

However, even these ambitious spending plans would not be enough to effectively address the problem of potholes faced by UK motorists, it says.