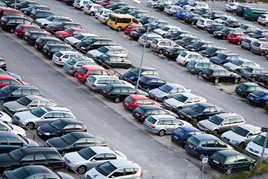 Leicester City Council has revealed a workplace parking levy (WPL) in the city would raise £95 million during the first 10 years of operation.

Under the proposed workplace parking levy, most employers with more than 10 spaces would pay £550 per space per year for a licence to provide car parking for their employees.

The council says that the high number of small businesses in Leicester means that around nine out of 10 are too small to have to pay.

However, it estimates that between 450 and 600 larger businesses across the city are likely to be eligible under the scheme.

A workplace parking levy in Leicester was first mooted in 2019.

Leicester deputy city mayor leading on transport and the environment, Cllr Adam Clarke, explained: “A workplace parking levy has been a consideration for some time in terms of addressing the city’s present and future transport needs, and it is clear it could play a major role in financing the kind of improvements set out in the draft Leicester Transport Plan, which are vital if we are to meet both the city’s transport needs and its environmental obligations.”

The workplace parking levy is designed to encourage people who travel into the city regularly for work to use alternatives to cars for their daily commute, while financing the improvements needed to ensure the city’s public transport, cycling and walking networks provide realistic alternatives to car travel.

Plans for the charge were featured as part of the Council’s Draft Leicester Transport Plan 2021-2036, published in the summer, which sets out priorities in meeting the city’s transport needs over the next 15 years.

A workplace parking levy has been operating successfully in Nottingham for nearly 10 years, and Leicester City Council has been working closely with both Nottingham City Council, and Leicester’s De Montfort University, to assess the economic, environmental, transport and health impacts of such a scheme in Leicester.

The scheme would require Government approval, after which it could start in early 2023.

The city council says it would work closely with local employers well in advance to prepare them for its introduction.

Cllr Clarke said: “Nottingham City Council has valuable experience of a WPL over the last 10 years or so, which is why we’ve been working closely with them in designing a scheme for our own city.

“The benefits of reducing traffic in the city are easy to see – anyone commuting during the school holidays can see how much difference even a 10% drop in vehicle numbers makes.

“Of course, people need to know there’s a reliable, convenient public transport system available if they are to be persuaded to leave their cars at home, and the money raised by a WPL would enable us to make huge steps forward in delivering that over the coming years.

“We are encouraged by the initial feedback we received over the summer and now really want to hear from people across the city to know what they want from such a scheme, and how to make it work as best as it can for Leicester.

“The Government would have to give us approval to bring in a scheme, but the more people take part in this consultation, the better chance we have of ensuring it can address local needs.”

A 12-week public consultation has now been launched, giving people and employers the chance to find out more details about the proposed WPL and how it would work, and to comment on the scheme. It runs until March 13, 2022.

Plans to introduce a workplace parking levy in Leicester should be scrapped while businesses struggle with the impact of Covid-19, says city councillor.