'Diesel still has a future in fleet, despite what the press say' says FCA: Company Car In Action 2018 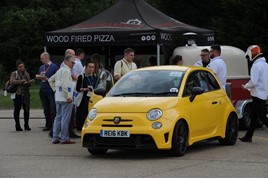 Diesel still has a future as a fuel for fleets, despite what the press say, said Chris Lovegrove, total cost of ownership manager Fiat Chrysler Automobiles, at Company Car In Action 2018.

He talked to Fleet News on the FCA stand.

Which models have been the most popular with fleets on your stand this year?

The Alfa Romeo Giulia and Stelvio have been popular, followed by the Jeep Compass, we have three Giulia Quadrifoglio booked out all day and obviously our regular more business focused cars are going out.

They are relatively new to the market and quite different to the traditional German saloon fleet car, we offer some alternatives to that and I think people are trying out something new.

What is your priority this year?

We want to get as much exposure as possible. We want to secure test drives where people might not have considered it as a fleet option before.

They are maybe used to seeing the same three cars on the list and want to try something different.

What are your fleet sales expectations this year and longer term?

We plan to do better than last year, as an industry it was lower but we were a bit behind the market share so we want to recover a bit of that and close the gap.

We think the Compass is a fleet orientated car so we have high hopes for that.

It is doing well in the Motability channel and contract hire, and driving more awareness to the range.

Giulia has more familiarity with fleets so it is starting to pick up.

We are still selling diesel and still have the same range.

There are signs of petrol being popular, but that trend is a bit slower for us than it has been for other manufacturers, as we have still got a very popular diesel range.

I suspect when we change model years and update some of our existing cars, that there might be less diesel options but I think it still has a future, and modern diesels are very clean, it just hasn’t come out very well in the press.

We will be bringing out hybrid and EV models next year onwards over the next four years.

Sergio Marchionne, chief executive of Fiat Chrysler Automobiles (FCA), has confirmed the brand will phase out diesel cars by 2021 in Europe.