Government is urged to compel transport providers to share data 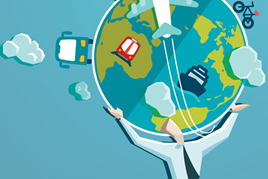 The Government must show political leadership when it comes to the availability of data if new mobility services are to succeed in the UK, experts have warned.

Furthermore, that open data must include a payment option, Members of Parliament on the Transport Select Committee were told.

The committee is investigating the potential of Mobility-as-a-Service (MaaS) and the barriers to its implementation and heard from a panel of mobility experts in Parliament, late last month.

Sampo Hietanen, CEO of MaaS Global, explained the data sharing issue. “MaaS needs the coming together of public transport, taxis, car shares, ride shares, car OEMs and many others within this field and it’s hard to get a joint vision,” he said. “You need political leadership to say this is what the market will look like.”

He also stressed the importance of the concept that open data should include a payment option for services. “Open data without the payment is of little value, because the end-user value for that is zero,” he told MPs.

Mobility platforms targeting the fleet market, such as Mobilleo from Fleetondemand, have launched in recent years, but if the mobility market is to reach its full potential and, as some experts suggest, reshape the company car market, intervention is needed.

Head of trade strategy at KPMG, Dr Sarah Owen-Vandersluis, suggested to the committee that some data, which could help develop the MaaS market, was “probably being withheld for competitive reasons”. And some of it, she said, is “not occurring in a form that’s easy to share”.

She told MPs that without a “nudge” from legislators it was going to be very difficult for MaaS operators to grow.

In fact, Johan Herrlin, CEO of transport data delivery firm Ito World, argued that it was the duty of public transport operators to provide third-party providers with open data. He said: “There are some impediments to people sharing , but I don’t think we should accept that.”

Herrlin argues that if a private company is offering public transport, sharing data should be the “trade-off” for operating services. “The responsibility for central Government is to define the standards for that data and an open mechanism by which the data gets shared,” he said.

However, despite the difficulties with accessing data, Hietanen told MPs there is a great deal of potential for MaaS to be a success in the UK.

“Many of the payers are market-driven so they’re keen on developing services,” he said. “There is also a lot of tradition of how to regulate markets so they can actually bloom.”

The benefit to Government is it could use MaaS to achieve policy objectives such as improving air quality or cutting congestion, with employees incentivised through the tax system to swap their company car allowance for a mobility budget, for example.

Hietanen told the committee such tax measures were a “really smart move,” but in Belgium, where legislators are pushing through tax changes favouring a mobility budget over a company car, the plan has been criticised.

Due to the way it has been constructed, critics say it is no different from giving employees a cash lump sum and will push company car drivers into the grey fleet.

The mobility budget, which is only available to existing company car drivers, allows the employee, if the employer agrees, to exchange their vehicle for a cash amount that is taxed at the same rate, which is less than their regular salary. The amount is increased by 20% if the employee also has a fuel card.

Polling by ALD Automotive among Belgium’s company car drivers suggests a ‘carrot’ system that encourages employees to use mobility services, without being forced to give up their company car, would be a much more effective.

“MaaS is coming,” she said. “It’s going to happen. If we then want it in a framework that has the best chance of meeting policy goals… then some level of data sharing and protocols will be essential.”

The SMMT has launched a new initiative to spawn partnerships, investments and acquisitions between leading automotive brands and technology start-ups and SMEs.

Mobility as a Service Alliance to speak at Fleet Live

New mobility concepts and systems will be central to Fleet Live, the biggest and most important exhibition and conference in the UK fleet calendar.