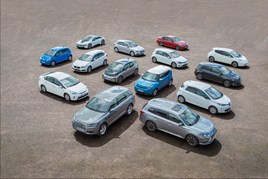 Gerry Keaney, chief executive of the British Vehicle Rental and Leasing Association (BVRLA), has called on Government to “get its act together” and address the “obvious failures” in its short-term tax policies for electric cars.

The current company car tax and VED rates act as “a positive disincentive” to fleet operators and drivers who want to take an electric car as a company car, Keaney told delegates as the BVRLA’s annual Fleet Technology Congress.

The company car tax band for zero emissions vehicles is currently scheduled to increase over the next two years to a high of 16% in 2019/20, before dropping to 2% the year after. The BVRLA wants the Government to accelerate the introduction of the 2% band.

“Short-term tax policy relating to electric cars today makes zero sense to anybody,” Keaney said. “It doesn’t reflect any sort of connected thinking between an air quality objective, between the diesel campaign that’s going on, between the tax harmonisation objectives.”

He urged the Government to take action in November’s Budget because “if it wants to make a difference, that is the single biggest thing it can do to accelerate the take-up of electric cars”.

Once the Government has addressed its short-term tax policy it needs to look at the longer-term because as the take-up of electric vehicles grows, the tax yield from both company cars and private cars will decline rapidly, Keaney said.

“There needs to be a grown-up discussion in the UK about what is going to replace the current tax yield that comes from cars when looking to tax electricity, for example. How is electricity going to be taxed? What is the role it’s going to play? How is it going to be addressed?”

Keaney repeated calls from the Fleet Industry Manifesto, put together by Fleet News, fleet operators’ association ACFO and the BVRLA in 2015, for the Government to consider road pricing to replace fuel duty.

“But actually, as the tax yield from hydro-carbons declines, there needs to be a discussion, and we need to be part of that, on how we top up the Exchequer’s coffers.”

Danny Jones, CEO of Off Grid, which specialises in battery energy storage, agreed that there are “significant challenges” for the grid, pointing out that in London 10% of sub-stations are already at capacity.

Applying to the Distribution Network Operator (DNO) for an upgrade can bring challenges both in terms of costs and timescales. Jones suggested it could take months or even years, and, in one instance, an organisation was facing a £70,000 upgrade.

The alternative solution, Jones believes, is a combination of smart charging (managing power demand) and energy storage (filling a battery with energy when power demand is it at a low level and then using that energy to top up the grid when the peak in demand occurs).

Chris Cheetham, business development manager of Pod Point, predicted that within the next two years energy providers are likely to incentivise EV drivers to charge their vehicles at certain times and in the “further future” (within the next 10 years) there will be 350kW rapid chargers, although it is likely to be “limited use” and “the energy supply has got to be there”.

The Government’s ‘misguided’ company car tax policy is depressing sales of electric cars at a time when they should be starting to increase, says Fleet Evolution.

Almost half of drivers (47%) do not envisage running an electric car for at least 10 years, if not longer, according to a survey from Venson Automotive Solutions.