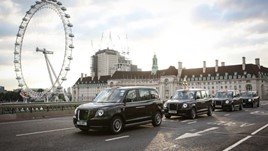 The study into air quality by King’s College London’s Environmental Research Group (ERG) monitored drivers of both diesel and electric taxis, measuring particulate matter and nitrogen dioxide inside and outside of their working environments.

It found that drivers of diesel taxis are exposed to pollution levels 1.8 times higher than those driving an electric model.

The research programme, partly funded by electric taxi firm LEVC, also set out to understand whether there are certain behaviours professional drivers can adopt to minimise their exposure to air pollution.

In-vehicle concentrations were measured over a period of four full working days during summer 2018. Initial analysis found that while cab drivers face the same level of exposure to poor air quality as other commercial vehicle drivers, and experience double the exposure at work compared to outside of work, their choice of vehicle made a very significant difference.

Average exposure to nitrogen dioxide and black carbon during a standard shift was 1.8 times higher for drivers of the older diesel taxis compared to those in all-new electric cabs.

King’s College London hypothesise that the reduction in exposure for drivers in the TX electric cab isn’t down to the fuel type alone, but also due to the TX’s improved air tightness and ventilation system over the older model, reducing infiltration into the cab. Like many premium modern vehicles, the TX has a multi-filter system that works to remove gases and particles from the incoming air.

Lead researcher Dr Benjamin Barratt of King’s College London said: “Lowest pollutant exposures were observed – particularly in the case of the TX – when the vehicle’s ventilation settings were set to recirculate and with the vehicle’s windows closed. This combination was found to reduce exposure by up to 67%, suggesting that these changes could mitigate pollutant exposures for these drivers.

“For the older vehicle, we believe that the vehicle’s cabin is not as air tight and therefore allows outside traffic emissions to infiltrate the cabin, even when the windows are closed.”