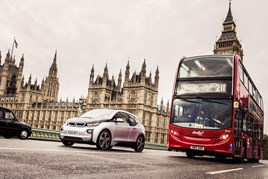 Just a week after his election, the new Mayor wants to bring forward the introduction of the zone. The current start proposed start date is 2020.

In addition, he wants to add an additional premium to the Congestion Charge for the most polluting vehicles from 2017, and begin to research a diesel scrappage scheme for the city.

Khan's proposals also look at Transport for London - suggesting its own bus fleet should be ULEZ compliant a year before the standards are introduced, and a hybrid/zero-emission bus procurement policy from 2018.

The Mayor of London, Sadiq Khan, said: “I have been elected with a clear mandate to clean up London’s air – our biggest environmental challenge.

“I know from personal experience that the city’s air is damaging people’s health as I only recently started suffering from asthma as an adult.  Many pollution hotspots in London are around schools, exposing our children to dangerously polluted air and putting them at greater risk of respiratory conditions like mine.

“The previous Mayor was too slow on this issue and the Government has been hopelessly inactive and it’s Londoners who are suffering as a result.  We need to speed up our efforts so I’ll be launching a consultation before the summer to kick-start the process. As well as my proposals, I’ll be seeking views on other ways we can do more to clean up the city’s air.

“In the past, London has only responded after an emergency, like with the Clean Air Act, which followed the Great London Smogs of the 1950s. But I want to act before an emergency, which is why we need big, bold and sometimes difficult policies if London is to match the scale of the challenge.”

The BVRLA expressed concern about bringing forward the ULEZ introduction.

Chief executive Gerry Keaney said: "These last minute adjustments to the ULEZ scheme would not give businesses time to prepare and could punish a large number of companies who have already planned their vehicle requirements based on the scheduled 2020 introduction date. It took years of planning, research and consultation to come up with the current ULEZ proposals and rushing through with any changes could have major unforeseen repercussions.”

“Air quality is vitally important, but we also need to ensure that people can afford to live and work in London. We believe that the current ULEZ proposals strike a good balance between these priorities and can be built on going forward.”