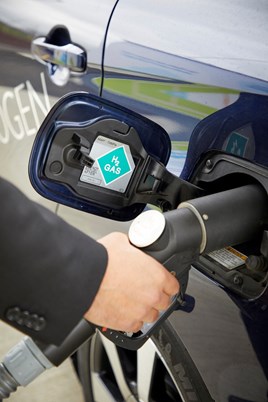 On March 18 the Government announced a new £23 million fund to accelerate the take-up of hydrogen vehicles and roll out more cutting-edge infrastructure.

Doug Thornton, chief executive of the BCGA, said: “Vehicles running on hydrogen have a realistic driving range in excess of 300 miles, which is a major benefit for drivers looking to make longer journeys using alternative-fuel vehicles.

“They also release no Nitrogen Oxides (NOx) and particulates - a problem associated with diesel cars - so they can make a significant, positive impact on air quality, particularly in towns and cities, and help address the health issues associated with air pollution.

“As a result, uptake of hydrogen fuelled cars has made faster progress across other parts of the world, including mainland Europe, America and Japan. But the lack of fuelling infrastructure nationwide has been putting the brakes on their introduction elsewhere in the UK.

“With the right infrastructure in place, fleet companies, public transport and car-buying consumers will be able to choose the vehicle which best suits their needs.”

The UK new car market kick-started 2017 with a milestone for alternative-fuel vehicles, according to the Society of Motor Manufacturers and Traders (SMMT).

The number of new cars registered on British roads in January topped 174,564 – rising 2.9% to its highest level since 2005. The alternative-fuel vehicle market share reached over four per cent for first time and registrations were up by a fifth.

Hydrogen Mobility Europe has announced the first 100 fuel cell electric vehicles are now on the road in Germany, France and the UK.

Shell has launched its first hydrogen refuelling station in the UK at its Cobham service station on the M25.