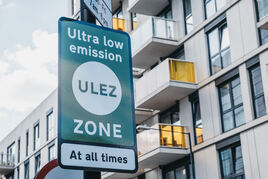 Seven in 10 vehicles entering London’s ultra-low emission zone (ULEZ) have been compliant, according to provisional data.

Previous research suggested that around 45% of all cars, 40% of light goods vehicles (LGVs) and more than one-in-three (38%) trucks will need to pay the charge.

However, Transport for London (TfL) stressed that figures may have been affected by lighter traffic during the Easter holidays and the week of protests by environmental group Extinction Rebellion.

Some 91,000 vehicles a day enter the air quality zone, which uses the same central London boundary as the congestion charge.

The compliance data comes after a think tank called for separate charges for entering the ULEZ and congestion charge zone, as well as proposed charges for the new Blackwall and Silvertown tunnel, to be replaced with a road-user charging scheme.

The new report, from the Centre for London, wants London’s patchwork of road charges to be replaced with a more sophisticated scheme.

By 2025, it says London could have at least five separate road-user charging schemes each featuring different vehicle standards, hours of operation, charge amounts and payment arrangements.

The report - Green Light: Next Generation of Road User Charging for a Healthier, More Liveable London - argues that the Mayor of London should replace existing and planned schemes with a single system, which would be much simpler for drivers to navigate.

The proportion of compliant vehicles entering the ULEZ has increased by more than a third, but TfL still expected to collect £450,000-plus in charges each day.