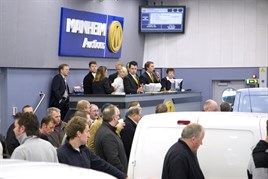 Consistency seems to be the key trend for the de-fleet sector in 2015, as March heralded another month of robust values.

The figures, taken from Manheim’s monthly Market Analysis, show that the average selling-price of a de-fleeted vehicle in March stood at £7,318 – just £1 short of February’s total.

The recent hold-steady in value could be linked to several months of consistency in vehicle condition. De-fleet units in March, for example, were just one month older than their February counterparts and had 1,147 fewer miles on the clock.

March is typically a busy month for the de-fleet sector, with plate changes and the Easter holiday often affecting values. This year has proved no different. March’s figure marks the third consecutive month of average value being higher than £7,000; something that should be an encouraging sign for the sector.

“Looking at trends in previous years, we can expect to see an up-turn in volume, and perhaps conversion rates, in the first few weeks of April.

“As I said last month, we witnessed a volume upturn of 25% following 2014’s spring plate change – something that we could see again this year.”

Looking at the figures in closer detail, six of the ten vehicle segments analysed as part of the report had a month-to-month increase in value throughout March.

Wiseman concluded: “One of the surest signs of a stable market is consistency in values and, so far, we’re seeing that trend ring true in 2015. I said in my last report that the Easter holidays and spring plate change should give the sector cause for optimism.

“While we haven’t seen the full effects yet, I predict that the sector can look forward to a busy and productive spring.”