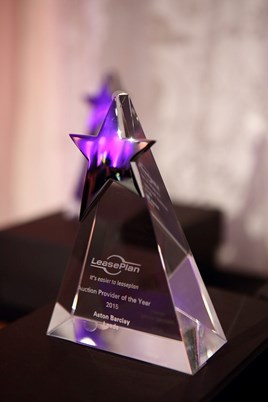 Aston Barclay's Leeds site has been named LeasePlan UK’s auction provider of the year for 2015 in recognition of its value and service levels over the past 12 months.

The Hillidge Road site was named the top monthly ranked of all audited sites three times throughout 2015 for value, achieving the best service provision for three quarters and platinum status for the second consecutive quarter in Q4 2015.

The Leeds site achieved a 100% score measured on timing, late notifications, admin, line-up and valeting, resulting in them also being named best performing auction site for service in Q4.

Westbury was named best-performing auction site in terms of value for Q4 2015, after topping the value ranking tables in October and November.

The strong performance of all Aston Barclay sites was recognised by LeasePlan UK, with the group achieving an extremely strong CAP Performance and conversion rate in Q4 2015.

The consistent high service levels of Aston Barclay’s Leeds, Prees Heath and Westbury sites throughout Q4 enabled the Group to receive a gold accreditation for the quarter, while Leeds and Westbury were the only measured sites to top the overall LeasePlan ranking table more than once throughout 2015.

Paul Mason, general manager, auction sales at LeasePlan, said: “The fantastic performance of Aston Barclay’s Leeds site, both in Q4 2015 and throughout the year, means they wholly deserve our auction provider of the year award.

"Strong performances across the entire group for the quarter completely justify another gold accreditation.”