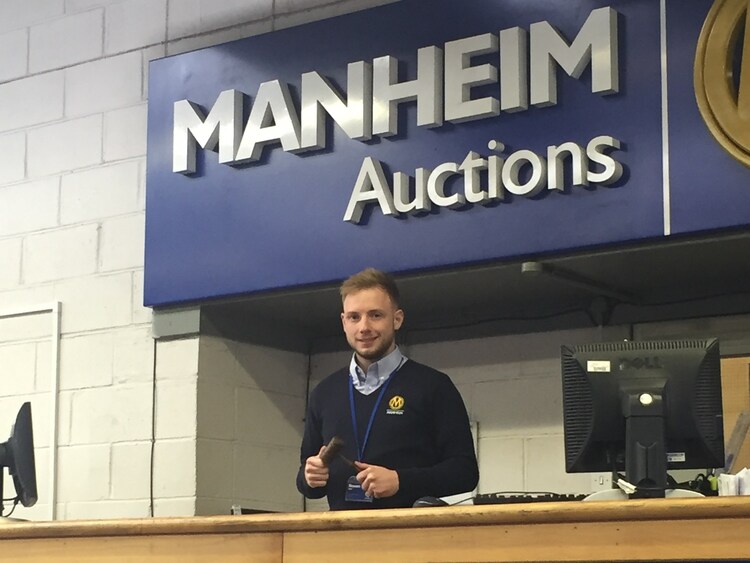 Manheim, the only organisation in the UK that has a dedicated programme for training the next generation of auctioneers, has seen three of its trainees graduate to become ‘masters of the gavel’.

Charlie Lawton (24), James Nutt (22), and Steven Ruff (25) successfully graduated from the Manheim Auctioneers' Academy in April following an intensive seven-month training programme that included working with experts, both from around the business and external, to learn the art of auctioneering.

Andy Conde, general manager of group auctioneers at Manheim, said: “I am absolutely delighted for Charlie, James and Steven. They are all now fully qualified auctioneers and I very much look forward to seeing them in action soon.

“I would like to thank all of our team members from across the business – and from organisations like RADA in Business, which provided vocal coaching – who have supported the Auctioneers' Academy and provided us with a fantastic framework to develop our talent of the future.”

Tim Hudson, managing director of Manheim Remarketing, said: “It’s great to see the development of talent from within the business and I congratulate Charlie, James and Steven on their achievement.

"Ultimately, the benefit for Manheim and our customers is that more effective auctioneers help to sell their vehicles more efficiently, for the best possible prices.”

Lawton, who has been with Manheim for almost three years, said: “Training to be an auctioneer is what I’ve wanted to do since I first joined the company in a temporary role in 2013, and the new auctioneers’ academy gave me that opportunity.

"Being told that I had passed the final assessment was the proudest achievement of my professional career.

"I used to be quite shy and didn’t like addressing even a small group of strangers, but now I can get up on the rostrum and confidently sell vehicles to crowds of buyers in our auction halls.”

Nutt has also worked at the company since 2013, and added: “I chose to enrol in the auctioneers’ academy as I saw it as a great opportunity to progress my career within Manheim.

"I was excited about the idea of communicating with buyers from the rostrum in order to sell vehicles.

"I gained so much confidence from the auctioneers’ academy, and learned how to have real presence in front of a crowd of people – helping to make a bid, rather than merely take a bid.

"I look forward to getting up on the rostrum regularly and gaining as much experience as I can.”

Ruff, who has worked at Manheim’s Mansfield auction centre since January 2015, explained: “My reason for joining the auctioneers’ academy was my long-held interested in auctioneering.

"The training has not only helped develop my abilities as an auctioneer, but also my knowledge of the job and the market, my confidence and assertiveness, and my ability to think on my feet.

"I feel that graduating from the Auctioneers’ Academy is the starting point of a great career and I am excited to see what challenges are ahead.

"I would like to thank everyone involved from around the business, as their effort and commitment to helping us reach our potential has been incredible.”