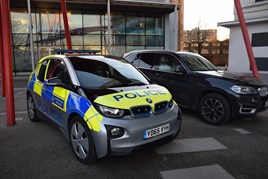 The Metropolitan Police is to introduce 250 electric or plug-in hybrid cars to its fleet as forces throughout the country consider the future role of zero-emission vehicles.

The Met’s ambitious project is part of a multi-million pound fleet renewal programme and will account for more than a quarter of 700 planned vehicle replacements on the 4,000-vehicle fleet in the next year.

Trials of electric vehicles have already proved successful including a BMW i3 Range Extender, which has been used on patrol and to respond to incidents. It has also been trialled by the force’s driving school.

A key factor behind the increased use of EVs is a bid to tackle pollution in urban environments, amid concerns about the health impacts of diesel exhaust fumes. The force covers more than 60 million miles a year and, as a result of concerns over emissions, it has ended its diesel-only policy so it can explore other fuel options.

The zero-emission focus will include the purchase of plug-in hybrids, electric vehicles and some of the first hydrogen-powered cars used for frontline police duties, while electric motorbikes are also being trialled.

Jiggs Bharij, head of fleet for The Met, said: “We are looking at different plug-in hybrid technology and alternative fuels such as hydrogen and compressed natural gas that could meet our requirements. To police London successfully we have to make sure that we have an operational police fleet which remains available 24/7, which is our top priority.”

The distance electric vehicles can cover on a single charge will be a limiting factor in maximising vehicle availability. As part of the initiative, Bharij will be making sure a charging point network is developed throughout the force’s area and that vehicles are allocated to suitable roles.

He added: “We need to be confident that the vehicles are capable of carrying and powering additional police equipment, which enables officers and members of the public to remain safe at the scene of an incident.

“Our aim is to make the fleet as clean as we can while maintaining operational capability. These first vehicles are a stepping stone that will allow us to build volume over time once we have the right technology and infrastructure in place.”

Initially, deployment of vehicles will focus on new ultra-low emission zones (ULEZs) spanning eight London boroughs that are being rolled out by London Mayor Sadiq Khan.

Bharij added: “The Met is leading the way, certainly in the police sector.”

The Met police is the largest electric vehicle initiative to date by police forces as they target reduced emissions and costs.

West Midlands Police has 30 electric Nissan Leafs, which are used to transport officers to appointments with members of the public rather than responding to emergencies.

To support the increased use of EVs, there are 32 charging points at 13 different locations across the force’s area.

West Midlands police and crime commissioner David Jamieson said: “As well as being greener, the Nissan Leaf costs a fraction of the cost per mile to run compared to a diesel or petrol car. Anything that helps us save money in the current climate is most welcome. They have the added bonus of being British-built in Sunderland.”

Gloucestershire police has added seven Nissan Leafs to its 400-vehicle fleet, which is predominantly diesel.

The force’s police and crime commissioner Martin Surl said: “We know that diesels are not as good for the environment as we thought. Electrification of the police fleet will continue, where operationally viable, and emissions will be an increasing element in the decision-making process alongside cost and performance when vehicles are purchased.

“I believe the police can and should make an important contribution to reducing emissions by using cleaner vehicles”.

West Yorkshire Police has joined forces with Peugeot to assess two electric vans as transport for scenes of crime investigators.

Fleet manager Keith Hidle said: “As policing nationally continues to transform and with savings still required, it is crucial we stay ahead of the game and look for possible new solutions.

“By testing more of these vehicles within our fleet and examining their performance, it will help us to identify where further savings could be made.”