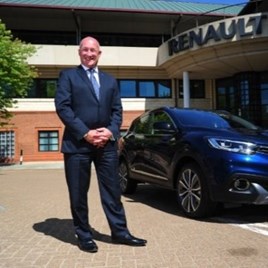 Renault is once again gaining traction in the fleet market, thanks to a wave of new product, a new fleet team and a determination to re-establish its fleet credentials.

It is a far cry from December 2011, when the French carmaker announced it was restructuring its business.

A number of models were pulled from the UK market, including Laguna and Espace, and its dealer network was cut by around a third.

Almost six years after the product cull, Mark Dickens (pictured),head of fleet operations and remarketing at Renault, is confident the brand is now re-establishing itself in the fleet market after almost disappearing from choice lists.

“Where we were then to where we are today is just chalk and cheese,” said Dickens.

"The fleet team has been expanded and restructured, and we’re working much more closely with our dealer network to deliver consistency to our customers.”

Koleos, an all-new D-segment SUV, joins new Captur, new Scenic and Grand Scenic hybrids, and an improved 250-mile range Zoe, to name just a few, with its all-new pick-up, the Alaskan, due to be launched next year.

Dickens joined the fleet team in 2014, as Kadjar began to suggest the sea-change in product to come.

He set about bringing the fleet business under one roof and expanding customer-facing teams.

A team of six business sales area managers has grown to 10 to advance Renault’s local fleet strategy, while a seven-strong group will manage large corporate customers.

And Mark Potter, previously Groupe Renault regional director for the North of the UK, has taken on the newly created role of national fleet manager (August 2, 2017).

Dickens remains head of fleet operations and remarketing, but in addition to looking after the central operations team, strategy, residual value management and remarketing, his role now also includes responsibility for the Motability programme and short-term rental contracts.

Patrick Whyman has been appointed national rental and mobility manager, another new role in the fleet team, with responsibility for sales to the rental industry and managing the Motability programme.

Reporting to Dickens, he has also been tasked with developing Renault UK’s strategy for new mobility solutions such as car-sharing schemes, car clubs and connected vehicles.

Renault says its local fleet strategy has already achieved remarkable success, with sales of 21,939 cars and vans in 2016, an increase of 25% over the previous year.

The transacting database has increased by 73% since Renault embarked on its fleet mid-term plan at the end of 2014, and Dickens says fleet sales are up again this year, with a 7% year-on-year increase and a 3.2% market share.

Van registration are down 10%, however, due to a decision to scale back some rental business.

Dickens says he expects the carmaker to really start reaping the rewards in 12 to 24 months’ time.

“We’re back; we’re gaining more traction in the market and people are starting to listen to us once again,” he said.