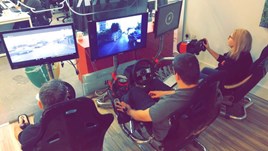 Credit hire services provider Edam Group has used advanced simulators to highlight the risks of driving while distracted or under the influence of alcohol to its employees.

Reported as the primary factor contributing to road accidents, distracted drivers contributed to an estimated 44% of accidents last year, according to Government statistics.

Steve Turner, group CEO of Edam Group, said: "Serious accidents caused as a result of drivers being distracted or under the influence of alcohol are often widely reported – and the drivers vilified –  in today’s society, and rightly so.

"When you see the statistics on the main causes of accidents and casualties, it reinforces the point that nobody should put themselves behind the wheel unless they can give the road their undivided care and attention.

“A significant number of cases we deal with result in the vehicle being a total loss, or write off, which can be a key indicator of the severity of the impact.

"Not allowing themselves to be distracted so easily, by food, a mobile phone or passenger, and certainly not driving after having a drink, is a simple way for drivers to reduce the risk of danger to them, their passengers, and other road users.”

During the Edam safety initiative, when three common distractions were introduced through the simulator, 69% of participants lost control of the vehicle, demonstrating the impact external factors can have on driver concentration.

Distractions included eating while behind the wheel and using a mobile phone, actions commonly undertaken by many drivers. Prior to experiencing the simulator, 79% passed the hazard perception test when not subjected to any distractions.

To experience the risks of driving under the influence of alcohol, the Edam Group team took to the simulator while wearing 'beer goggles', with only two participants able to complete the task while ‘under the influence’.

Edam Group: ‘We want to improve the credit hire experience for the customer’

Edam Group has ambitious plans to double in size over the next three years and its dedicated fleet team is just the start. Andrew Ryan reports

Fleet and safety: The highs and lows of being risk assessed

Online assessments have become a standard part of driver risk management, but what determines a determines a driver’s overall rating? Elizabeth Howlett reports.