Fleet and business new car registrations fell by 4.7% in 2017, according to figures released by the Society of Motor Manufacturers and Traders (SMMT).

Despite the overall decline, new car registrations remain high, with the market still the second biggest in the EU, behind Germany.

Mike Hawes, SMMT chief executive, said: “The decline in the new car market is concerning but it’s important to remember demand remains at historically high levels. More than 2.5 million people drove away in a new car last year, benefitting from the latest, safest, cleanest and most fuel efficient technology.

“Falling business and consumer confidence is undoubtedly taking a toll, however, and confusing anti-diesel messages have caused many to hesitate before buying a new low emission diesel car.

“Keeping older vehicles on the road will not only mean higher running costs but will hold back progress towards our environmental goals.

“Consumers should be encouraged to buy the right car for their lifestyle and driving needs irrespective of fuel type – whether that be petrol, electric, hybrid or diesel as it could save them money.

“2017 has undoubtedly been a very volatile year and the lacklustre economic growth means that we expect a further weakening in the market for 2018. The upside for consumers, however, is some very, very competitive deals.”

Last year, UK new car CO2 emissions fell for the 19th consecutive year and this is the first year the figure has risen since records began.

Hawes said: “Diesel cars, due to their greater fuel efficiency, typically emit on average 20% less CO2 than the equivalent performance of a petrol-engined vehicle. It’s disappointing, therefore, to see these advances undermined by the backlash against cleaner, low emission diesels, with the recent drop in sales the prime cause of this increase in CO2 emissions.

“New technologies, including the latest low emission diesels, are vital if the country and the industry are to meet their climate change targets.

“For the industry, hitting the 2020/2021 goals will be extremely challenging and Government must create the right policies and incentives to encourage all low emission vehicles irrespective of fuel type, whether that means battery vehicles, hybrids, plug-in hybrids, hydrogen or petrol and diesel models.

“Fleet renewal is the fastest way to lower our carbon emissions and improve air quality and consumers should buy the right car for their driving needs.”

SMMT will publish its full comprehensive report on new car CO2 in March.

However, there was good news for the alternatively fuelled vehicle market, which grew 34.8%. A record number of hybrid, plug-in hybrid, battery electric and hydrogen fuel cell cars were registered – resulting in the sector’s highest-ever annual market share of 4.7%.

UK consumers buy more plug in cars than anywhere else in Europe and demand grew by a quarter in 2017 – making Britain a key market for these vehicles.

“Used car sales will continue to grow in importance, and we have already seen dealer groups move to enhance their used car offerings.

“Demand will continue to rise for hybrid, and pure electric vehicles and the strength we’ve seen in 2017 is indicative of a growing acceptance with consumers.

“Historically, December registrations tend to be relatively subdued as consumer demand is low and the slightly enhanced value of the New Year registration lead to greater activity in January.”

Ashley Barnett, head of consultancy at Lex Autolease, added: “It’s not surprising to see a continued fall in registrations, particularly in light of the publicity around emissions, introduction of Clean Air Zones and changes to government policy around the future taxation on company cars. Despite this, we experienced strong growth within the SME market last year.

“We expect to see a decline in overall registrations in 2018 as consumers look for clarity around future economic plans and environmental strategy. Despite the rise in average CO2 per new car last year, we predict adoption levels of ultra-low emission vehicles (ULEVs) will rise in the year ahead as consumers review fuel type in their vehicle choice.” 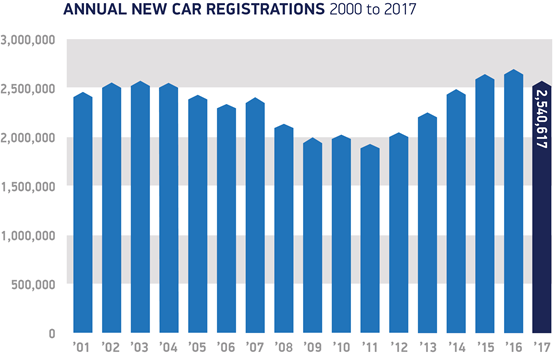