Almost half of UK drivers still use phone at the wheel despite tougher penalties, research finds 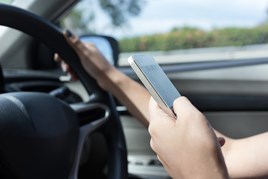 Research by The Car People has found that almost half (49%) of UK drivers admit to being distracted behind the wheel of their cars because of mobile phones despite tougher new laws brought in a year ago.

The survey by the used car supermarket asked 1,500 drivers exactly what distracts them when behind the wheel and how it impacts on their driving.

It found that getting a phone call (31%), receiving a new message notification (21%) and using their phone for directions (20%) were the most common distractions across the general population, with changing music putting off 26% of 18-24-year-old drivers.

Following the research, The Car People challenged two drivers aged 25-34 to test their driving in a car simulator to see just how easily distracted they are and how dangerous this can be.

This video can be found on The Car People's blog on distracted driving.

Ryan Robbins, senior human factors researcher at TRL, who conducted the driving simulation said: “It is difficult to do two things at once well, but when one of those things is driving it is virtually impossible. Driving is a demanding task that can suddenly require all of a driver’s attention when a hazard arises.

"A driver who has been distracted will be slower to anticipate and react to hazards on the road, and that delay can prove fatal. Most of us drastically overestimate how well we can drive, even when we are concentrating fully, and the evidence is clear that when we are distracted our driving is considerably worse."

The research found that while Government figures show that 18-24-year olds are the most overrepresented in car crashes, when it comes to mobile phones, it is now drivers aged 25-34 that are the most distracted, with more than three quarters (77%) admitting it is a factor.

This groups said they are distracted at the wheel by taking phone calls (40%), using their phone for directions (38%), changing music (23%) and sending text messages (18%).

Twelve per cent said they get distracted by taking photos and eight per cent by looking for selfie opportunities.

As a result of being distracted by their mobile phone, 8% of 25-34-year olds said they had crashed their car, 15% had experienced a near-miss, 10% had gone through a red light and 22% had been beeped at.

The survey also found passengers can be a huge distraction for people when they are driving, with almost a third (28%) admitting that they chat to others when the should be focusing on the road while 4% get distracted behind the wheel by being intimate with a partner.

In a wide ranging debate, fleet decision-maker revealed the challenges they faced in ensuring safe use of mobile phones, combatting drug driving and key elements of a grey fleet policy.