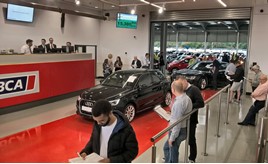 BCA has announced that its auction of 1,000 vehicles from Volkswagen Financial Services made more than £12.6 million.

The Perry Bar sale held on August 21 was the largest physical entry by a single vendor on one day at BCA and attracted nearly 200 in lane buyers, with over 1,000 bidders on BCA Live Online.

BCA’s chief commercial officer Craig Purvey said: “This was a record breaking sale event for the BCA and VWFS partnership, with over 1,000 vehicles offered for physical sale from one seller on one day.”

The event sold over 950 vehicles, equivalent to a 94.5% conversion and an average value of 101.64% of CAP Clean.  Underlining the demand from buyers, sales proceeds exceeded £12.6 million with an average selling price in excess of £13,300..

“There was confident bidding throughout the event, underlining that the combination of attractive stock and an engaged buyer base generates exceptional results.”

The average value of ex-fleet and lease cars sold at BCA in June achieved a record value for the third time in the past four months.

Used car values too an expected dip in July, as a result of the holiday period, but remain strong with year-on-year values rising by £501.