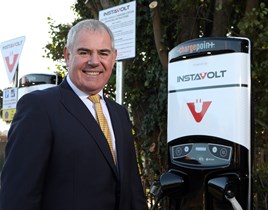 InstaVolt has topped the user satisfaction rankings for electric vehicle charging networks that can be used by multiple models of EVs in a new survey.

The research, carried out by Zap-Map, saw the Tesla Supercharger network, which can be used only by Tesla drivers, achieve the highest overall score.

The survey asked more than 1,500 drivers to rate charging networks according to the quality of service.

It found 88% of InstaVolt’s users were satisfied with the service (65% being ‘very satisfied’).

Respondents reported the stations’ ease of use and contactless card payment solution as just some of InstaVolt’s industry-defining features.

Tim Payne, CEO of InstaVolt, said: “From the outset we’ve set out to enhance the charging experience, with ease of use, reliability and charger performance being top of our objectives.

“We’re thrilled with the reception we’ve received from our customers, many of who tell us that InstaVolt is their go-to network for on-the-go charging.

“By offering a rapid-only network with the highest levels of customer service and reliability, drivers turn up to an InstaVolt charger confident that they’ll be back on the road in minutes.”

InstaVolt’s chargers are available to use on a pay-as-you-go basis with no prior registration, membership or monthly subscription fee required.

Users tap their contactless credit or debit card to commence a session, charge-up and go.

InstaVolt currently has around 200 rapid charge points in the UK, and in February it announced plans to acquire an additional 400 chargers from ChargePoint.

Combining AER and AFR could be solution to PHEV reimbursement, insight