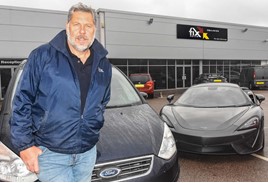 The approval was made possible by its relationship with Ford main dealer, Gates Group.

Fix Auto Stevenage’s owner and chair of the UK National Leadership Team ,Terry Gilbert (pictured), said: “Once again I am delighted to be part of another vehicle manufacturers’ official vehicle repair programme.

"It’s the result of a lot of hard work, investment and reflects the efforts of all involved from within Fix Auto Stevenage."

Gates Group’s joint managing directors John Belton and Darren Cooper said: “Although we have always recognised Fix Auto Stevenage as our go-to and preferred accident repair centre in the area, by obtaining the official approval status, we may now direct all of our local vehicle bodywork requirement to Terry and his professional team.”

Fix Auto Malvern has become the latest franchisee in the network to expand and open a Fix & Go express repair facility.