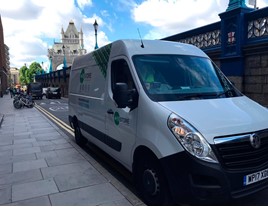 The introduction of London’s ultra-low emission zone (ULEZ) has led to changes in vehicles run by Restore, which it says will save £45,000.

Working in partnership with vehicle supplier Days Fleet, the London-headquartered company has realigned its fleet to mitigate wherever possible the impact of the ULEZ.

The company has future-proofed 40 light commercial vehicles and four 7.5 tonne trucks that travel in and out of the ULEZ on a daily basis thereby safeguarding against the impact of its already announced expansion in October 2021.

The firm, which operates 169 commercial vehicles, securely stores and manages business-critical documents on behalf of a wide range of organisation including blue chip companies, schools, hospital and the legal profession.

Chris Miles, national fleet manager at Restore, said: “Ahead of introduction of the ULEZ we analysed the fleet and identified 40 vehicles that would be impacted as they operated in and out of eight of the company’s satellite depots around London and would be driven into the Zone daily.”

The daily charge for cars and vans that do not meet the ULEZ entry standard - Euro4 for petrol and Euro6 for diesel - is £12.50 and for commercial vehicles above 3.5 tonnes the charge is £100 for non- Euro VI models.

The central London ULEZ, which mirrors the capital’s Congestion Charge operating area, is in place 24 hours a day, seven days a week, every day of the year including weekends and public holidays.

A two-phase logistical strategy was devised in partnership with Days Fleet from which Restore contract hires the majority of its diesel vans on four-year/140,000-mile contracts.

Phase one saw 15-20 vans across the all-Vauxhall fleet comprising Movano, Vivaro and Combo models identified as due for replacement. Irrespective of location, new Euro 6 compliant vans were all delivered to London depots with non-ULEZ compliant Euro 5 vehicles relocated from those sites to locations outside the capital. Additionally, four new 7.5 tonne DAF trucks were leased to replace older vehicles.

A second phase saw Euro 6 vans already operating from depots outside of London, particularly in the south west of England, relocated to London sites and swapped with Euro 5 models.

Miles said: “Logistically it was a major challenge because we did not want the switching of vehicles to impact on business operations and we wanted to avoid the cost of hiring vans temporarily.”

Expansion of the ULEZ from October 25, 2021 to the Inner London area bounded by the North and South Circular roads, although vehicles using those roads and not entering the ULEZ will not be charged, had already been announced prior to the introduction of the existing Zone.

Miles said: “Armed with that knowledge we have future-proofed the fleet as all commercial vehicles operating in London now meet the required non-charging entry criteria for the expanded ULEZ.”

It has calculated with Days Fleet an exact saving of £44,686.59 over the life of the respective vehicles.

Mark Thomas, business development manager at Days Fleet, said: “The savings were calculated based on the remaining life of the vans operating in London and them being driven into the ULEZ five days a week if they were not replaced with Euro6 models and subtracting the logistical cost of relocating vehicles.

Miles concluded: “The financial savings for the business were significant. However, it is also important for the company to do what is right for the environment.

“Restore Plc cares about the environment and renewing the fleet, ensuring compliant vehicles operate in the ULEZ and that we look to introduce electric vans in London as long as they meet operational payload requirements supports the company’s environmental commitment.”

As chargeable Clear Air Zones are introduced in other towns and cities nationwide - Birmingham and Leeds, for example, are due to introduce charging initiatives next year – Restore will undertake further fleet analysis to ensure its commercial vehicles meet entry standards.

Previous research suggested that around 45% of all cars, 40% of light goods vehicles (LGVs) and more than one-in-three (38%) trucks will need to pay the charge.

Transport for London (TfL) has earned £220,000 per day since the introduction of the London Ultra Low Emission Zone (ULEZ).

Interest in alternatively fuelled vehicles has soared since the introduction of London’s ultra low emission zone in April, says Carwow.