Cox Automotive says that the used car market should achieve 7.8 million transactions in 2019 following the release of Q2 figures.

The latest figures from the Society of Motor Manufacturers and Traders (SMMT) show that used car transactions in H1 passed the four million mark for the fourth consecutive year, and represent a slight decline of 1.7% on 2018, in line with the forecast published in the Cox Automotive Insight Report in June.

Philip Nothard, customer insight and strategy director for cars at Cox Automotive, said: “The final Q2 figure of 2.03 million transactions is within 0.36% of our Q2 forecast, and represents a strong result for the used car market.”

Nothard says that the first half of the year brought “mixed fortunes” for the automotive sector in general and, while there has been a relatively large drop in new car registrations, the used market has remained comparatively stable.

“That said, used car retailers had their fair share of challenges in the first half of the year,” he said. “We saw low stock availability push up wholesale prices in Q1, this was due to a number of factors, but lower fleet volumes following the introduction of WLTP arguably had the biggest impact.”

Wholesale volumes increased in the second quarter, but this led to a rapid fall in used values that caught some retailers unawares. “This initial phase of steep price-drops has now levelled out, but it’s likely we will see a slight downward trend on values through the remainder of 2019,” continued Nothard.

The results of Cox Automotive’s monthly dealer sentiment survey showed that retailers experienced some challenges around consumer demand from March onwards, with almost 60% reporting that demand was down YoY in March.

The downward pressure on prices also had an impact on margins as retailers struggled to realise the full value of part-exchange vehicles, and 52% of dealers reported that margins were down year-on-year in April and May.

Nothard said: “We believe that the steep fall in values in Q2 was partly a reaction to the buoyancy in the used market over the past two years.  Consistently high levels of demand have off-set normal seasonal patterns, holding prices at an unusually high level.

“As supply began to exceed demand, we saw a fairly abrupt fall in values, but we do believe that the market will now return to a more traditional seasonal ebb and flow.

“On a positive note, we’ve seen a stabilisation of both values and volume in the first part of Q3, and we expect the wholesale market to hold steady over the rest of the year.

“While these used car transactions do reflect a slow market decline, the used market has shown its strength once again, and we expect the majority of retailers to continue their focus on used car sales throughout the rest of 2019.” 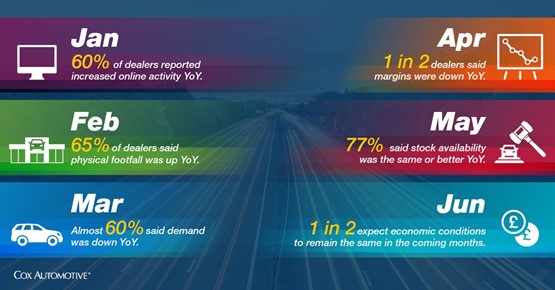 Car traders are planning to buy less used diesel stock as demand for the fuel among consumers is declining.