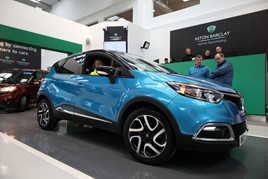 Aston Barclay’s Prees Heath and Wakefield auctions have both broken records as the UK used car industry experienced a bumper start to 2020.

JLR and Volvo retailer Hatfields Group celebrated selling £1 million of used cars in a single sale for the first time at Prees Heath, disposing of 88 cars at an average of 100% of Cap Clean.

This follows a move by the dealer group to prepare its used cars to Grade 1 and 2 standard with the help of Aston Barclay’s refurbishment services.

Hatfields has fully embraced Aston Barclay digital platforms including holding a weekly ‘Live’ online auction at Prees, with any unsold or overage stock being offered on the Aston Barclay e-Xchange wholesale platform.

It is just one dealer group that has contributed to the growth of e-Xchange which has already sold a few hundred cars for vendors before they reach physical auction, says Aston Barclay.

Paul Turner, Hatfields’ remarketing manager, said: “Over the past six months we have actively prepared our cars to a higher standard and the majority are now Grade 1 and 2. This means buyers can get their auction purchases to market quickly with less spend, which has contributed to an increase in sales.

“With a consistent quality of cars offered the Aston Barclay team has built up a good clientele of buyers in the hall and online each Friday.”

The 18-acre Wakefield opened its doors in early 2019 as Europe’s most advanced auction centre and hosts 15 dealer and fleet auctions per month. It has become Aston Barclay’s HQ as it houses the group’s IT, accounts and HR teams as well as being home to The Car Buying Group which now employs 50 people.

“Our group performance and the used market in general has been very strong in January and February for the dealer and fleet sector as the Hatfields and Wakefield performance has reinforced,” explained Neil Hodson, Aston Barclay’s group CEO.

“Pent up consumer used car demand has meant huge pressure on the wholesale market for new stock. This demand looks set to continue during the March plate change and beyond.”

TCH Leasing has hired Aston Barclay as its remarketing supplier.

The family-run business will dispose of over 1,000 used cars each year through Aston Barclay’s Westbury site in Wiltshire.

Cargiant has agreed to extend its remarketing contract with Aston Barclay, continuing a 20-year long relationship with the auction house.