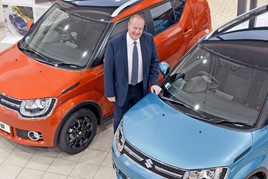 Suzuki’s head of fleet and remarketing, Graeme Jenkins, has been made redundant following a restructure at the business.

Operations are being centralised, with the carmaker saying the objective is to provide a consistent approach to all of its customers.

Dale Wyatt, director automobile at Suzuki GB, told Fleet News that the departure of Jenkins did not signal a lessening of focus on fleet.

“There is no change in focus at Suzuki, but a restructure with the merger of functions to create a centralised operations function,” he said.

“With a new back of house function comprising logistics, storage, sales support, factory ordering, remarketing and customs, the objective is to provide best in class operations support to all of our customers.”

He added: “The fleet sales team remain in place and our new structure will underpin our fleet business and enable fleet growth in 2021.

“With our 100% hybrid range and the addition of the new Across PHEV and Swace we are well placed to broaden our fleet appeal.”

Fleet sales were not a priority for Suzuki until it recruited Jenkins, formerly of Maserati, to the role of head of fleet in January 2017, with more than 90% of sales retail.

Jenkins said there was “zero experience” within the business of any core fleet activities before his arrival and he admitted that, in addition to other core areas of fleet, such as rental, public sector and the SME markets, it was “tough” convincing the completely retail orientated dealer network, that fleet was part of their future.

The answer was the Suzuki Business Partner programme, which launched in July 2019, allowing Suzuki dealers to sign up and be involved in delivering fleet sales by generating their own local business.

More than 60 dealers signed up to the scheme at launch, including several multi-franchised sites.

Jenkins told Fleet News in September that he hoped the new strategy would boost true fleet sales to around 40% of the brand’s total sales by 2021.

The brand's success was recognised at the Fleet News Awards, with Suzuki being named the Most Improved Fleet Manufacturer in March.

Jenkins said: “Sitting alongside other shortlisted finalists, such as Toyota and Hyundai, was in itself a reward – but for the panel to vote us as the winner above these mature fleet brands was beyond even my expectations – a moment I’m truly proud of, mainly for my people that had worked so hard to make all the parts come together.”

He continued: “I’m very proud to have led the department and what I consider to be the best team in the industry over this period, giving Suzuki a fleet presence they could only of dreamed of four years ago.

“I’m sad to be moving on, but hopefully these consistent actions and strategy will be to the benefit of the next part of my journey in our industry.”

2019 was a transformative year for Suzuki GB. Two years in the making, in July the brand launched the Suzuki Business Partner (SBP) programme in the UK.

Suzuki has confirmed the pricing of its new Toyota RAV4-based Across plug-in hybrid SUV, which goes on sale in November.

Suzuki’s Swace hybrid estate will be priced from £27,499 when it is launched in the UK this month