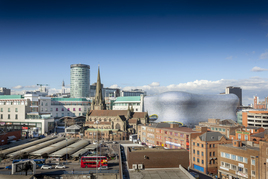 Fleets are being urged to prepare for more clean air zones (CAZs) and tighter restrictions after the latest scheme was switched on in the Midlands.

Birmingham’s CAZ was launched on June 1, but drivers of the most polluting vehicles were given “time to adjust”, with charges not taking effect until June 14.

The daily charge for vehicles that do not meet the latest emission standards in the class D zone is £8 for cars, vans and taxis, and £50 for HGVs and coaches. Exemptions are available, but anyone who fails to pay within six days after entering the zone faces a fine of up to £120.

Charges are based on vehicles meeting certain emission standards – Euro 6 or better for diesel engines, and Euro 4 or better for petrol.

Birmingham’s switch-on comes after the opening of Bath’s CAZ in March – the first such zone outside of London – which charges non-compliant vans, taxis and minibuses £9 to enter. Non-compliant trucks and lorries, and buses face a daily charge of £100, but cars and motorbikes avoid any penalties in Bath’s class C zone.

Manchester’s CAZ, which will be switched on from May 30, 2022, is a class C zone, with non-compliant coaches and HGVs charged £60, and taxis and private hire vehicles £7.50, with a temporary exemption for Greater Manchester-licensed vehicles until May 31, 2023.

Older vans and minibuses will also get a temporary exemption until May 31, 2023, but will be charged £10 thereafter.

"Fleet managers need to be aware of the impact that CAZs could have on drivers, both now and in the future," Ashley Barnett, Lex Autolease

The opening of Manchester's CAZ will come after the expansion of London’s ultra-low emission zone (ULEZ) to an area bounded by the North and South Circular roads.

Currently, the ULEZ occupies the same area as the Congestion Charge Zone in the city centre, but it will cover an area 18 times that size when it goes live on October 25.

It is estimated that as many as 35,000 vans and 3,000 trucks driving into London every day do not meet the required Euro 6/VI emissions standards and will be liable for the expanded ULEZ charges.

With further CAZs being planned, including a zero-emissions zone in Oxford, Ashley Barnett, head of consultancy at Lex Autolease, told Fleet News: “As we drive towards net-zero, CAZ charges will, inevitably, become tougher as they come into force in cities across the UK.

“It’s an important reminder for fleets to continue to consider the latest and cleanest technology in order to stay ahead of any potential low-emission restrictions.”

Concerns surrounding CAZs have been highlighted as two of the top three issues that car and van fleets believe they will face before 2026.

Findings from Arval Mobility Observatory’s 2021 Barometer show that the top most common answers to the question, “what are the main challenges facing fleets in the next five years?”, were, firstly, the introduction of stricter CAZs (35%), followed by increased vehicle taxation (34%) and then the creation of more CAZs (30%).

Barnett said: “Despite most modern fleets being exempt from these new charges, fleet managers need to be aware of the impact that CAZs could have on drivers, both now and in the future.”

A Fleet News poll suggested that more than two-thirds (68%) of respondents were already operating vehicles within a CAZ, while almost three-quarters (72%) expected to do so in the future.

However, just one-in-10 had received help from local government to comply with restrictions. Instead, a quarter (25%) of respondents said they were redeploying newer, compliant vehicles from elsewhere, with the same proportion avoiding travel within the CAZs altogether.

Almost a third (29%), meanwhile, said they were upgrading vehicles to compliant models, with one-in-six (17%) prepared to pay the charges and just 4% choosing to retrofit existing vehicles.

Transport for London (TfL) has allocated £52 million in funding through three scrappage schemes ahead of the ULEZ expansion, helping to replace or retrofit almost 10,000 vehicles.

The van and truck scrappage schemes were suspended last year, because the money had all been allocated to successful applicants.

Alex Williams, TfL director of city planning, said the scrappage schemes had enabled 9,500 of the most polluting vehicles, including about 4,500 vans, to be taken off the road. “We just didn’t have the money to continue,” he said.

Birmingham launched a £10m scrappage scheme in May, but it is aimed at supporting people working in the city’s CAZ who earn less than £30,000 per year.

They have also been given a 12-month exemption from charges, while they adjust to the new regime.

Birmingham City Council’s £10m Heavy Duty Vehicle Fund, meanwhile, is aimed at small-to medium-sized enterprises (SMEs) in the West Midlands, which are operating trucks, coaches and vans in excess of 3.5 tonnes in the zone.

A city council spokeswoman said that close to £2m of grants has either been paid out or allocated to businesses since the scheme opened in October 2020.

“There are a number of support schemes in place for businesses in Birmingham and the West Midlands,” she continued. “There are also temporary exemptions that apply to commercial vehicles registered within the zone and those with existing financial agreements.”

Greater Manchester has secured £120 million in Government funding to help fleets upgrade to cleaner, compliant vehicles, with applications opening from November this year.

Van operators can now access up to £4,500 towards the replacement of a vehicle – £1,000 more than initially proposed – and Greater Manchester Hackney Cabs can get up to £10,000.

HGVs can now get up to £12,000 towards replacement, nearly three times more than was initially offered, and coaches are now eligible for £32,000.

Bath secured £9.4m of funding from Government to help residents and businesses to adapt to its CAZ, with a further £1.6m allocated to local bus operators to retrofit vehicles not already compliant in the zone. A further £10m has been secured through finance providers.

Beighton, who was speaking at the Virtual Smart Transport Conference, said that about 750 vehicles could receive funding after successfully undergoing telematics tests to see how the zone was impacting fleet operations.

A further 550 vehicles are currently being assessed. Leasing companies have also been playing their part. Hitachi Capital Vehicle Solutions (HCVS), for example, has been helping fleets analyse vehicle utilisation costs in and around CAZs.

“As many other local authorities prepare to introduce emission taxes on drivers, the challenge is working with manufacturers to improve the availability of electric LCVs for our SME customers.”

It has not only been the availability of electric vans that is an issue, however, with lead times lengthening for the majority of cars and vans as manufacturers grapple with the global semiconductor shortage.

Almost two-thirds of respondents to the Fleet News poll said that long lead times for new vehicles would impact their ability to operate compliant vehicles within a CAZ.

One fleet manager said that, although it had not been affected by the semiconductor shortage, “many companies will be” and they may not be able to “renew or upgrade vehicles”.

Natalie Chapman, head of policy for the south at Logistics UK, said: “Due to the shortage, some vehicle manufacturers have announced delays to production and in some cases, are pausing production at certain sites; this may make it more challenging for businesses to purchase the vehicles they need in order to reach compliance with various air quality schemes.

“Logistics UK is liaising with its members and the vehicle manufacturers’ trade body, SMMT (Society of Motor Manufacturers and Traders), to identify the scale of the challenge and help move the industry towards a solution.”

Post-pandemic delayed renewals could also become an issue, according to Barnett. “With business priorities shifting since the pandemic and more employees working from home, some fleets have decided to delay renewals, resulting in older and dirtier vehicles being driven which may be subject to charges,” he said.

“This includes those operating commercial fleets who may have held off replacements due to uncertainty in the market. Fleet managers might consider utilising their fleet more effectively to minimise costs by reallocating older vehicles to an alternative part of the country.”

However, Barnett says the “bigger problem” could be with employees who have opted out of company car schemes in favour of a cash allowance.

“Unknowingly, a business may have a handful of drivers with older cars and vans which don’t meet emissions standards and, consequently, are falling foul of the new restrictions,” he said.

Andy Eastlake, managing director of The Zemo Partnership, says there has never a better time for fleets to embrace the cleanest and most efficient vehicles, read more here.

For the latest on clean air zones, including what is being planned and where, go to fleetnews.co.uk/caz.

Clean air zones among biggest fleet challenges, according to Arval

Concerns surrounding Clean Air Zones (CAZs) have been highlighted as two of the top three issues that car and van fleets believe they will face before 2026.