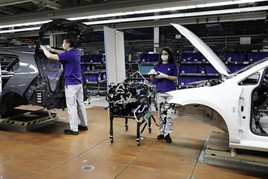 Cox Automotive is predicting more new car market disruption for the fleet industry, with the global shortage of semiconductors not the only factor behind long lead times.

New car sales in the UK were down by more than 16% in June and down by almost 27% in the first half of the year, when compared with averages from the previous decade, according to the Society of Motor Manufacturers and Traders (SMMT).

However, Cox Automotive says that the semiconductor shortage is not the only factor affecting new car sales, with several factors yet to be felt fully across the new vehicle supply chain.

Philip Nothard, insight and strategy director at Cox Automotive, explained: “We’re all very aware of the challenges caused by semiconductor shortages. However, there are even more significant challenges facing the new vehicle market which are likely to contribute to further market decline. For instance, the true impact of Brexit is yet to be felt.

“The automotive industry within the UK and globally is having to change and rethink distribution strategies. This can lead to a delay in the movement of goods into the UK.”

Furthermore, he says that there will be new vehicle tariffs applied to new cars coming into the country when production does catch up.

“There’s also the planning or adaption of agency model strategies by vehicle manufacturers in the sales process of new cars,” he said.

“Consumers are increasingly buying online which also extends to cars for those who decide not to follow the traditional sales process in dealerships.

“The pandemic has given manufacturers and dealers time to reflect on how they sell cars and the increasing ways that it can take place.”

“Manufacturers will be conscious of the imminent introduction of fines for those who breach Corporate Average Fuel Economy (CAFE) regulations – which will push traditional OEMs towards the EV market,” he added.

“In addition, we’re likely to see more EVs topping the vehicle registrations list in future, as many OEMs use raw material shortages to accelerate the transition away from ICE (internal combustion engine) to EV.”

The disruption, according to Nothard, is likely to keep the used vehicle market continuing its upward trajectory in terms of vehicle prices and demand.

The data provider’s daily Live trade values show that, on average, trade prices for used cars have increased by £1,700 or 13.5% in the last three months.

In June alone, the average used car price was up 4.8%.

The average selling price of a three-year-old medium-sized van, with 60,000 miles on the clock, for example, is 58% higher today than it was at the start of 2020.

Nothard said: “The bottom line is that although both the retailers and OEMs face supply challenges, they will remain focused on annual market shares in each global market and position against their peers.”

He believes new car supply pressures will continue to be felt into 2022 and fuel the current used car price boom. However, he predicts that the situation will stabilise as winter arrives, furlough ends, and the economy opens.

“It’s a great time to be selling a used car as they will fetch higher prices, but not so much to buy one,” he said. “Also, it’s also not great news for dealers operating within the current or expanding ULEZ areas in London. Trying to sell a non-compliant petrol or diesel car within this area will be more difficult.”

Tenfold increase in UK car production in May compared to the same month last year, but new data from the SMMT shows it's still well below pre-pandemic levels.