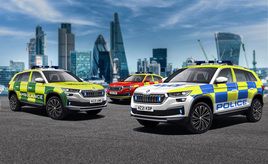 The updated Skoda Kodiaq has joined the brand’s blue-light fleet, with a more efficient engine range and prices starting from £28,185 OTR.

All five powerplants are now part of the Volkswagen Group’s latest EVO range and feature a host of advanced features.

For example, both diesel engines (150PS and 200PS) feature a ‘twin dosing’ exhaust gas treatment that reduces nitrogen oxide emissions, while the new 2.0 TSI 245PS petrol engine fitted to the new Kodiaq vRS is significantly lighter than the twin-turbo diesel unit it replaces.

For example, the Kodiaq’s petrol engines are more efficient than their predecessors thanks to an injection pressure of up to 350 bar that ensures lower hydraulic losses and a reduced fuel delivery rate.

The Kodiaq’s ‘go-anywhere’ ability has always been a key element of its appeal to the UK’s emergency services, says the manufacturer.

The new model builds on this with a wide range of engines that can be specified with four-wheel-drive.

Since its launch four years ago, the Skoda Kodiaq has become a popular part of the UK emergency services fleet. Among the hundreds of Kodiaqs in active service are 50 fully-converted examples used by the Police Service of Northern Ireland and 30 used as fast response support vehicles used by West Sussex Fire and Rescue service.

A further 18 Kodiaqs are currently serving on the front line for the South Western Ambulance Service NHS Foundation Trust.

Skoda UK has appointed Kevin Rendell as its new head of sales operations following five years as head of aftersales at Volkswagen UK.

Skoda’s facelifted Kodiaq SUV will have an on-the-road price from £27,650 when orders open next month.