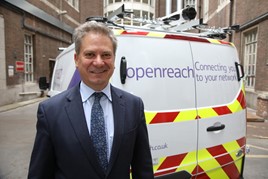 The boss of BT Openreach says he has spoken to Vauxhall about the potential of bringing production of the Vivaro-e to Luton, by combining electric van demand from some of Britain’s biggest fleets.

With around 27,000 vehicles, Openreach operates one of the UK’s largest fleets, and has run diesel versions of the Vauxhall van for the past 15 years.

It announced in the summer that it was expanding its zero-emission fleet with an order for 270 fully electric Vauxhall Vivaro-e vans and nine Corsa-e cars.

BT Group is also a founder member of the UK Electric Fleets Coalition, which it formed with The Climate Group.

BT Group announced in 2018 that it was signing the Climate Group’s EV100 pledge to electrify its fleet by 2030.

Meanwhile, British Gas-owner Centrica, which operates 12,000 vehicles, made the same pledge last year. It also placed an order for 1,000 electric vans from Vauxhall in the summer and says further orders will follow as it transitions to an all-electric fleet.

The new all-electric Vauxhall Vivaro-e vans are being rolled out over the next few months and be rolled out nationwide to be used by British Gas engineers.

BT Openreach’s chief executive, Clive Selley (pictured), says he is looking at the potential of teaming up with other large van fleet operators to make UK-based production of electric vans commercially viable, with potential partners including Royal Mail and British Gas-owner Centrica.

He told This Is Money: “We have a job of work to convince the big vehicle manufacturers to put electric van production lines into the UK. So, we are saying, 'Couldn't we aggregate demand and convince one of the manufacturers to do just that?'.

“Then I'd love to convince Vauxhall, for example, to put an electric van line into Luton. Vauxhall are receptive to this idea.”

Vauxhall makes diesel-fuelled Vivaro vans in Luton, while the electric version – the Vauxhall Vivaro-e – is made in France.

A Vauxhall spokesman would not be drawn on the specifics on any talks, but simply said it was in discussions with those companies who have already placed orders for Vauxhall Vivaro-e and those interested.

Read crucial guidance for fleets on the adoption of EVs in the December edition of Fleet News.