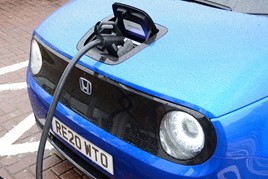 Electric Vehicle Association (EVA) England has outlined its key recommendations for the improvement of the UK’s public charging network, following a survey that invited electric vehicle (EV) drivers to share their views about their experience with public chargepoints.

The survey was conducted in response to the UK Government’s consultation on the ‘Consumer Experience at Public Electric Vehicle Chargepoints’.

More than 1,000 drivers participated in the survey, highlighting widespread support for the rollout of contactless credit and debit card payments, being able to use one charge card (also known as an RFID card) or app across multiple charging network operators, and higher levels of reliability.

The lack of an effective national strategy for creating kerbside charging infrastructure is emerging as the biggest barrier to adoption of electric vehicles (EVs) by businesses, according to the Association of Fleet Operators (AFP).

Gill Nowell, media spokesperson and a director at EVA England, said: “There are many benefits of making the electric switch, from the pleasure of driving to improving local air quality. With automotive manufacturers, fleets and businesses all now choosing to go electric, we need to improve the consumer experience at public chargepoints to take EV adoption mainstream.

“Based on the outputs of this survey, paving the road for the mass adoption of EVs looks like contactless card payments, roaming, consistent chargepoint reliability, simplified billing, and easy access to information about what chargers are where.

“We recognise that the pace of chargepoint deployment is increasing and that the infrastructure going in the ground today is greatly improved from that which was being installed even five years ago. However, we encourage Government to intervene now in order to ensure that all charging infrastructure is reliable, safe and user-friendly, across all driver groups.”

Based on the results of the survey, EVA England has made the following recommendations to Government:

The Government should mandate that Charge Point Operators enable roaming and allow for drivers to use one app or RFID card on all networks.

Government should mandate a minimum amount of data that must be made open in a standardised format to EV drivers to better equip drivers to plan their charges along the public charging network.

All prices for electricity sold at EV charging sites should be stated in pence/kWh.

Government should work with the EV chargepoint industry to establish a roadmap to mandate 99% reliability and 24/7 helpline availability within agreed timescales.

Standardised signage should be increased in terms of both number and visibility both at the site of the chargepoint as well as on a range of approach roads.

The Electric Vehicle Association (EVA) England has opened to members, providing the opportunity for electric vehicle (EV) drivers to express their views.

The lack of an effective national strategy for creating kerbside charging infrastructure is emerging as the biggest barrier to adoption of EVs by businesses.